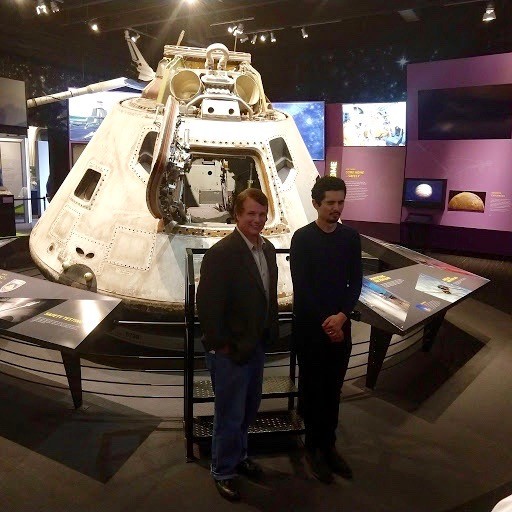 Earlier today while sitting in the NASA Gallery at the Great Lakes Science Center, director Damien Chazelle, who was in town to promote his new film, First Man, admitted he still finds the various photos of the moon in the room to be incredibly impressive. “I keep seeing the archival footage on the screens out of the corner of my eye, and it’s still so amazing,” he said.

They also perused a Neil Armstrong flight log that a NASA rep brought to the event. While in Cleveland in the 1950s, Neil Armstrong flew planes for NASA before leaving for the Air Force and then relocating to Houston to work once again for NASA. He logged those flights into a weathered notebook, and Mark Armstrong said he thought he recognized his father's handwriting as he flipped through its pages.

Chazelle and Mark Armstrong have traveled to a few different cities and held Q&A sessions after screenings. They’ve been pleased with the positive reaction the film has received.

“It’s been pretty awesome,” said Chazelle, who also directed Whiplash and La La Land. “One of my favorite parts of the process of getting the movie out there is to visit a variety of places with it and see how different places respond. One of the things that it reminds me of and what’s so special about what Mark’s dad did is no matter where you go in this country and anywhere in the world really, people feel a personal connection to the moon landing. It was the most unifying event in world history. I feel honored that I can commemorate it. There were something like four to five hundred million watching it world-wide.”

Based on a book about Armstrong by James R. Hansen, the film centers as much on Armstrong’s family life as it does on his heroic journey into outer space.

Mark Armstrong pointed out that the Hansen book is the only authorized biography of his father.

“Dad had a lot of opportunities to talk about his story,” he said. “Jim Hansen is the guy he chose. It’s the only one he participated in. He gave 50 or 60 hours of interviews to inform the book. There were lots of places he could have used as a starting point. The book First Man is the best place. It’s very technical and very complete. They started there and then went deeper into the aspects that were important for the film.”

Tapped to play Neil Armstrong, Ryan Gosling gives a nuanced performance in the movie as he shows how emotionally unavailable the fearless Armstrong could be.

“Dad is not an easy guy to play,” Mark Armstrong said. “What was important for us when we started talking with [screenwriter] Josh [Singer] and Damien [Chazelle] and Ryan [Gosling] was we wanted them to know that you have to stop reading everything about him. The stuff you read will lead you astray. He had many facets. He had a great sense of humor and a dry wit. He could be really intense, and then, he could be really playful. He’s a complex guy. You had to know that going in. After my first reading of the script, I was concerned because I wanted people to get to know my dad, but if every moment is a tragic moment, you only see him when he’s dealing with these difficult situations. It was important to see these other sides to him. Josh and Damien did an incredible job of splicing together these moments of levity and everyday life in between these very serious moments.”

Claire Foy gives an equally remarkable performance as strong-willed Janet Armstrong. Tragically, the family's matriarch died before she was able to see the finished product.

“It was amazing working with Claire,” said Chazelle. “Before I met her, I had my doubts that a British actress of today could embody the Midwestern spirit of a woman from the ‘60s, especially someone as specific as Janet. I was so lucky that I got to meet the real Janet and spend some time with her. She was just extraordinary. One of the most rewarding parts of making the movie was seeing Claire interpret her. She recreated Janet of the ‘60s. She did a beautiful job.”

“Mom had a chance to read the script, but she never had a chance to meet Claire,” he said. “But it’s a wonderful tribute to her. She was a very strong independent woman. That comes across in spades in the performance and the writing. We couldn’t be happier about her portrayal and the portrayal of all the astronaut wives who had to sacrifice so much. They were incredible women.”

The film recreates the rocket launch scenes with such attention to detail, it makes viewers feel just how intense they must have been. Chazelle said that was intentional.

"We want to make the audience feel like they’re lifting off on a theme park ride or in a virtual reality zone," he said. "It’s part of the general attempt to remove the barrier of history and make it feel like you were back there living in real time, and you don’t know if it’s going to work out. That’s what I wanted to impress on people. It wasn’t a preordained conclusion that they were going to safely land on the moon. Like Janet says in the movie, they were making models out of balsa wood and crossing their fingers. There was so much unknown. It’s hard for us now 50 years after the moon landing to fathom the extent to which these people were jumping off a cliff into the great unknown.”