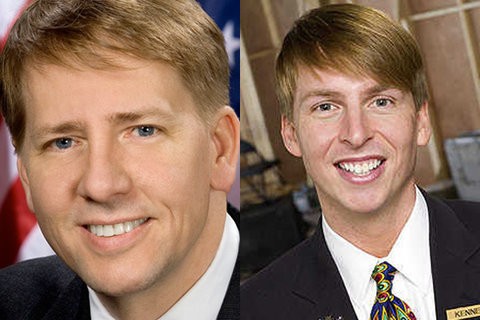 People have joked for years that Ohio Democratic gubernatorial candidate, Richard Cordray, was the U.S. politics version of Jack McBrayer's Kenneth "The Page" Parcell on 30 Rock, and Cordray even embraced the comparison in one of his "Richard Cordray Reads Mean Tweets" videos.

One member of the Buzzfeed community (Quick update: It was a Cordray aide) took the joke to the next level, however, and created a quiz where participants have to read a quote and determine who said it: Richard Cordray or Kenneth Parcell.

As a casual 30 Rock fan and someone who actively follows both Richard Cordray and his opponent, Republican Mike DeWine, pretty closely, I figured I'd be able to come out on top and prove that once and for all, Cordray and Kenneth the Page are not a similar as people like to believe.

I took the quiz.

Quotes were obtained from popular 30 Rock episodes and Cordray's Twitter feed, and my sad attempt to differentiate the two offered a result of 3 out of 9 correct guesses. The sad thing? I only did better than 17 percent of most people that take the quiz.

I can only assume that people who do better are obsessed with 30 Rock (or Cordray's Twitter feed, I'm not here to judge), because this quiz was way harder than I imagined it would be.

On a positive note, it's endearing to know that Rich and Kenneth’s similarities go beyond the same haircut and friendly smile — because all of the quotes referenced are extremely upbeat and positive, which we could all use a little more of in this trash fire of a political climate.

Feel free to take the quiz for yourself here, and hope that you do far better than I did.