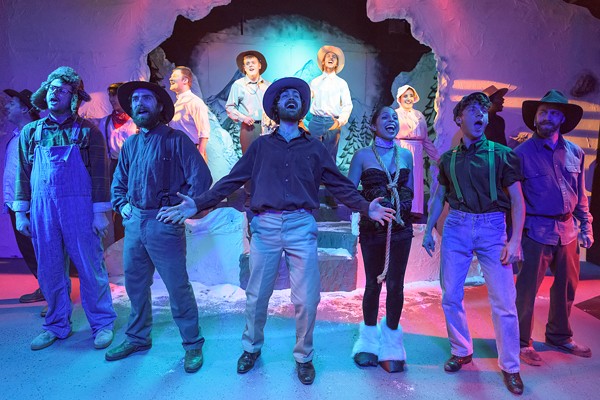 It’s an old joke. You say, “What is the essence of comedy?” And just as the person starts to respond, probably with “I don’t know,” you interrupt and say “Timing!” It’s funny because it’s true.

And if you asked me what’s wrong with Cannibal, the Musical, now at Blank Canvas Theatre, I’d quickly reply, timing! Because there is little to none of it in this piece featuring book, music and lyrics by (a much younger) Trey Parker. Yes, he’s the co-creator of South Park and The Book of Mormon, but Cannibal was his first show, and it shows.

It features all of Parker’s trademark gifts for politically incorrect japes and gross-outs. Indeed, there are splatter-zone seats ringing the stage where patrons are promised to be doused in various theatrical replicas of bodily fluids expelled from various character orifices.

What the show doesn’t have are well-crafted comic characters (even gross ones) or a small twinge of wit. And the timing! Long pauses surround most lines as the actors appear to grope for what to say next. This is hard to understand, since director Patrick Ciamacco has proven himself to be excellent at his craft. Evidently he spent too much time making sure the fart nozzles and eyeball squirters were working perfectly.

The story? It’s based on the true account of Alferd (yes, that’s how it’s spelled) Packer who was officially charged with cannibalism for dining on some members of his expeditionary party when they were snowed in somewhere on the way to Colorado during the winter of 1874.

That’s a lot to chew on, but in this 90-minute show the fun cannibalism stuff doesn’t happen until about the 75-minute mark. That leaves a lot of time to fill and this cast isn’t up to the challenge—unless you laugh loudly and reflexively whenever anyone says a dirty word or does something disgusting. In that case it would be easier to just attend any seven-year-old boy’s birthday party.

I have nothing against gross and offensive humor, as long as it is performed with skill and a soupcon of intelligence. None of that is present in this show, except for a clever rendition of “Let’s Build a Snowman” performed wonderfully by David Turner and a reasonably joyous ensemble singing of “Hang the Bastard” after Packer is arrested for his dietary choices.

As Packer, Noah Hrbek sings adequately but is oddly and inappropriately inoffensive. And Meg Martinez as Polly, a local reporter who tries to get the story, also sings well but does not have the acting chops to handle some supposedly amusing moments.

Trey Parker is a gift to the world for his later works cited above which are clever, subversive, and hilariously brilliant. As for Cannibal, it’s only for the hard-core fans of juvenilia (insert wet fart sound here). Timing!