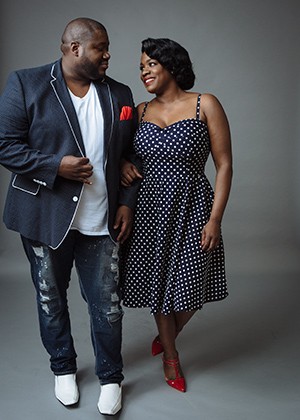 Michael Trotter Jr. and Tanya Blount-Trotter, the husband and wife that make up the Albion, Michigan-based country/gospel/blues act the War and Treaty, initially met at a music festival that promoted the theme of “romantic love.”

“It sounds cheesy,” admits Blount-Trotter in a recent phone interview as she and her husband drive to a tour stop in Louisville. The War and Treaty performs with Courtney Marie Andrews at 8 p.m. on Monday, Nov. 8, at the Grog Shop in Cleveland Heights. “[Trotter Jr.] was performing. I was one of the organizers for the festival. I saw him on stage, and he just blew me away. I had to meet with him, and we became friends.”

The duo made its debut last year with the EP Down to the River, a disc that shows off their soulful vocals and gospel roots (Trotter Jr. grew up in Cleveland and got a good dose of the music at his Baptist church).

The album came to fruition quite organically.

“I remember hearing Tanya humming,” says Trotter Jr. when asked about the album’s inspiration. “It sounded like she was singing a song that I grew up on called ‘Down by the Riverside.’ I loved that song from church. I thought about where our world was at and how much pain our world was experiencing. I thought, ‘We need to go down to that river and wash all that stuff away.’ That’s where it started. It’s not a religious song. It’s just a soulful song about life and letting it go. That’s how the EP got rolling.”

To promote the EP, the group was set to perform with alt-country icon Buddy Miller at last year’s AmericanaFest, which took place in Nashville. When Miller got sick, the band had to improvise.

“We went to Nashville on our last dime,” says Trotter Jr. “We were struggling, but we were hopeful. The powers that be and our team at the time worked it out that we would take his place. We went to the awards show as audience members. We saw people we love like [singer-songwriters] Marty Stuart and Graham Nash. [Singer-songwriter] John Prine walked up there. We were so excited. We had high hopes, and we thought our opportunity would be at the Cannery [concert club] that night filling in for Buddy. We were thankful and grateful and had a blast performing with a band that we had never performed with before.”

The group wowed, and even though it didn’t perform with Miller, it struck up a friendship with the man. He produced the band’s latest album, Healing Tide.

The  disc opens with the gospel-inflected “Love Like There’s No Tomorrow” and then cranks up the volume for the Ike and Tina Turner-inspired title track, a song driven by a hefty organ riff. It's a superb collection of songs that shows how well the duo's voices mesh.

“We wanted to show growth [on the album],” says Trotter Jr. “We wanted to show a different side of the War and Treaty and a different side of Nashville. It’s that Nashville sound with that the War and Treaty sound. We had multi-instrumentalist Grammy winners play on it and also had the legend herself, Emmylou Harris, sing on it, and [mandolinist] Sam Bush play on it. We stepped out of our own comfort zone. We enjoyed what we came up with. It was a reflection of what we were feeling. It’s so interesting because we were feeling the heaviness of our world but writing out of the hope in our hearts. That’s what comes across, hopefully.”