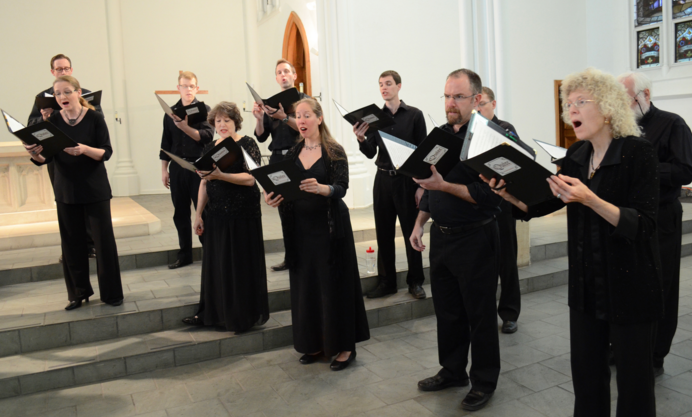 Conductor Jay White is leading Quire Cleveland into its second decade following the retirement of the professional choir’s founders, and his debut program at St. John’s Cathedral in downtown Cleveland on Friday, November 2 at 7:30 pm is a complex web of music celebrating All Saints Day. White, who toured for eight seasons as a countertenor with Chanticleer, and now serves as professor of voice at Kent State, has put together a program that interleaves Gregorian chants of the Requiem Mass with mass movements by several different Renaissance composers, and memorial motets written in honor of Machaut, Ockeghem, Josquin, and Tallis. Add sumptuous double choir pieces by William H. Harris and there’s a rich choral tapestry in store for your ears. A freewill offering will be received, and the concert will be repeated at St. Sebastian’s Church in Akron on Saturday, November 3 at 7:30 pm (donations welcome).

The celebrated Los Angeles Guitar Quartet will make a return visit to the Cleveland Classical Guitar Society’s International Series on Saturday, November 3 at 7:30 pm at First Unitarian Church in Shaker Heights. Their eclectic program ranges from an arrangement of a Rossini overture to English Renaissance tunes and Pat Matheny’s Road to the Sun. Reserve your tickets online.

Cellist Joshua Roman is returning to Cleveland (he trained at the Cleveland Institute of Music) for two gigs this week. On Saturday, November 3, he’ll join pianist Gregg Kallor and mezzo-soprano Jennifer Johnson Cano in Kallor’s musical setting of the Edgar Allan Poe thriller The Tell-Tale Heart on the Tuesday Musical Fuze Series at Akron’s E.J. Thomas Hall. Then on Sunday, November 4, the Cleveland Cello Society will will present “An Afternoon with Joshua Roman” at the Music Settlement in University Circle. He’ll play a 3:00 pm recital of music by J.S. Bach, Ginastera, and Penderecki, as well as his own compositions and his arrangements of tunes by Jimi Hendrix and Radiohead. If you’re a cellist yourself, bring your instrument along at 1:00 pm for a David Popper Études Workshop. Interested? Register here.