The Future of a Blue City in a Red State 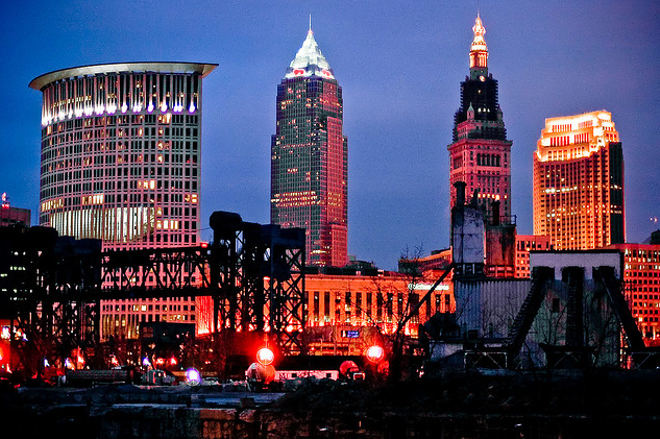 Ohio’s election results last night were devastating for the democratic agenda to protect our region’s vulnerable communities and reduce inequities. It was not a bad night nationally—our peers in Wisconsin and Michigan elected Democratic governors. Even deep-red Kansas elected a Democratic governor. And perennially purple Florida passed a ballot measure by more than 60 percent to restore the vote to disenfranchised citizens who had served their felony sentences.

But Ohio’s entire Democratic ticket for statewide office lost, as did the ballot measure, Issue 1, that offered the best chance in decades to reform our broken criminal justice system.

In the coming days, experts will help us understand why the blue wave stopped on Lake Erie’s shores. But today, thousands of passionate, committed progressives in our state are waking up and saying: What now? What next?

These questions are particularly palpable in Cleveland and Cuyahoga County, where Democrats racked up the most significant margins of any region in the state—far outstripping the margins in the counties surrounding Columbus and Cincinnati.

If Cleveland is a blue city in a red state—or, more generally, if Northeast Ohio is a blue region in a red state—then it is time to look locally and turn to our municipal and county leaders to step up for the citizens who will be left behind under a Republican governor and Republican statehouse.

And yet, the results of last night’s elections come on the heels of truly uninspiring public conversations around our region’s future. In his 13th year in office, Mayor Frank Jackson's recent state of the city address was little more than a litany of quotidian accomplishments. He only vaguely alluded at the beginning and end of the speech to the goal of making Cleveland a "great" city rather than a technocratic bureaucracy that can fill potholes and run a balanced budget. And even if Jackson does believe Cleveland could be a great city, he provided no roadmap for how to get there in his speech.

In June, local attorney Jon Pinney tried to offer his own vision of Cleveland’s future during a City Club speech that has continued to circulate in the local media zeitgeist. But he merely conceived of Cleveland as an oligarchy, run by an elite group of nonprofit executives and businessmen who could save Cleveland through better alignment from the top down.

Indeed, there is reason to wonder what it means to be a Democrat in a region like Cleveland. The economic plans espoused by Frank Jackson and Jon Pinney are fundamentally Republican in nature. Both recognize the facts of growing inequality in our region. But they both propose trickle-down economics to fix the problem. Both want to funnel money into projects like the Q's renovation, Blockland Cleveland, and developments in downtown, University Circle and Ohio City. Both hope that by generating economic activity for the already wealthy, there will be a spurt of economic activity that will raise the rest of the region along with it.

But these are not Democratic visions for a municipality or a region. Indeed, these proposals demonstrate a misunderstanding of economist Thomas Piketty’s fundamental insight into our society: So long as the growth of capital through investment outstrips the growth of the economy as a whole, inequality can only increase. The wealthy will become wealthier and the poor can only hope to not become any poorer.

Democrats at a national level have understood this insight and have begun to focus on reorienting economic growth around decreasing inequality and increasing opportunity for the marginalized.

But here at home, our politicians and civic leaders seem satisfied with filling potholes and putting on conferences. They have failed to give us a vision for where we could go, and as a result have squandered the democratic margins we have in this region in the hopes of placating the developers and landlords who they see as our future.

Cleveland could be presenting bold, innovative policy positions. Cleveland could be unlocking the potential of its children and citizens. Other cities are doing it, even on tight budgets. We could be that city. But instead we have chosen to accept the status quo as the best we can hope for.

To our politicians and civic leaders: Think outside the box. The status quo is not acceptable. We may have to live in a world of incremental change and marginal improvement, but our imaginations don’t have to live there too. And without some goals of what to reach for, the marginal improvements have been getting smaller year by year, until it feels like we are standing still.

To progressives and Democrats in Northeast Ohio: It is time to focus locally. It is time to show up to every city council meeting, every county council meeting. It is time to look to municipal elections in 2019 and 2021. With control of the House, national Democrats can hope to staunch the bleeding in national programs like Medicare, Medicaid and Social Security. But we won’t be making gains. And with the governorship and statehouse in Republican control, there’s little to look forward to from Columbus either.

It is time for us to focus on our strength—on paper we are a deep blue, Democratic city. We must take this strength and hold our leaders accountable to it in the real world.

We still have incredible opportunity in this region. We are a blue city in a red state, built by the sweat of generations before us who believed in a vision of progress and prosperity. That vision still exists, even if our leaders have forgotten it. It is time to remind them.


Rebecca Maurer is an attorney who lives and works in Cleveland, Ohio. She is the author of SerialLand, which discusses Cleveland history and the intersection of economic justice and criminal justice issues in Northeast Ohio.