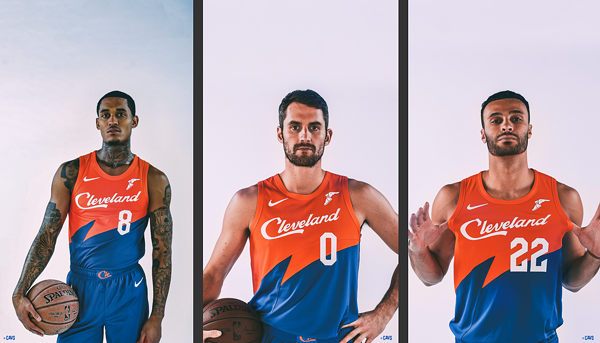 Your 1-10, cellar-dwelling Cleveland Cavaliers unveiled their 2018 City Edition uniforms today and they are nothing if not a fitting sartorial choice for a 1-10, cellar-dwelling basketball team. (You can read more about the "inspiration" and meaning behind all the details of the aforementioned garbage duds at the link above.)

Some assemblage of players, at least those who are not injured, will wear these garish getups for six games this year, all of which they will almost assuredly lose.

Here are some garbage quotes from the principles involved.

“The new City Edition uniform tells the story about The Land that we love – Cleveland,” said Cavaliers CMO Tracy Marek. “Collaborating on design with Nike is always a great opportunity, and to work with Destination Cleveland to represent the city’s brand on our uniform is something that is very special and unique for any team. We know the players and our fans will wear the Cleveland City Edition with pride.”

“Pride in Cleveland has been higher in the past few years due in large part to the 2016 Cleveland Cavaliers championship, and the Cavaliers decision to feature Destination Cleveland’s script wordmark on the 2018-19 City Edition jersey says so much about the team’s commitment to being champions of the city as well as on the court,” said Colette Jones, Vice President of Marketing at Destination Cleveland.