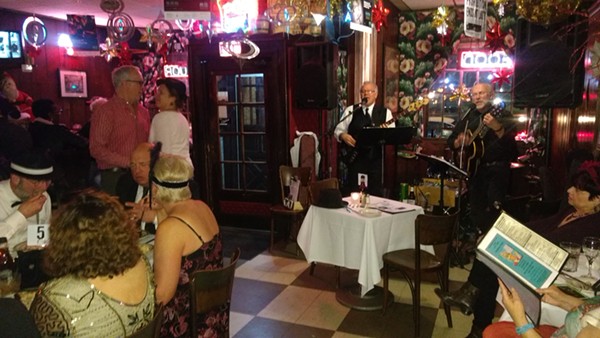 A “noble experiment” that banned the consumption and sale of alcohol, Prohibition thankfully came to an end with the ratification of 21st Amendment on Dec. 5, 1933. To mark the occasion, Prosperity Social Club holds an annual Prohibition Repeal Supper Club party.

“It’s been 85 years since the production, transport and sale of alcohol was criminal in the United States, but I’d venture to guess that for most people — definitely for restaurant, club, pub, brewery, winery and distillery owners — the end of mandatory temperance and the crime, brick wine and bathtub gin that came with the ban is still very worthy of a toast,” says Prosperity owner Bonnie Flinner in a press release about the event.

“We’ll also have Corpse Reviver No. 2 on the menu,” says Flinner, referencing a drink chronicled in pages of Harry Craddock’s The Savoy Cocktail Book. “Corpse Revivers started out as hair-of-the-dog ‘day after’ drinks, but as it turns out, many of them are pretty tasty the night of too.”

Local hero Hollywood Slim will perform from 7 to 9 p.m.