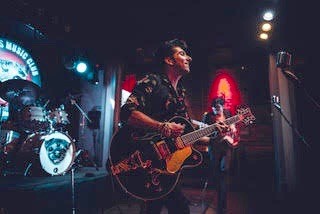 Update: Last month, Stella’s Music Club announced that it would launch a record label. Now, it's just released more details regarding the label. All of the artists who sign with Stella’s Records will have their music produced by locally based Jim Wirt (Incubus). During the course of his lengthy career, Wirt has won numerous awards and his productions have sold more than 17 million records. Locally based sound engineer Jim Stewart will assist Wirt, and Warner Music will distribute the label’s releases.

Stella’s encourages local bands to attend the party and bring their CDs to distribute to local press/media. Wirt will be in attendance and meet fans at a booth at the club.

While in Cleveland, the band also met with locally based producer Jim Wirt (Incubus) and played a late afternoon set at Stella’s for members of the media and friends of the club's owner.


The performance marked the band’s first-ever gig in Cleveland.

The group will return to Cleveland to play the club again on Dec. 12 with the Dollyhoppers and the Black Moods. Stella's Records has also approached the Dollyhoppers, an indie-folk band from Akron, about a possible record deal.

The Dec. 12 concert, which will be open to the public, will serve as a launch party for the label.