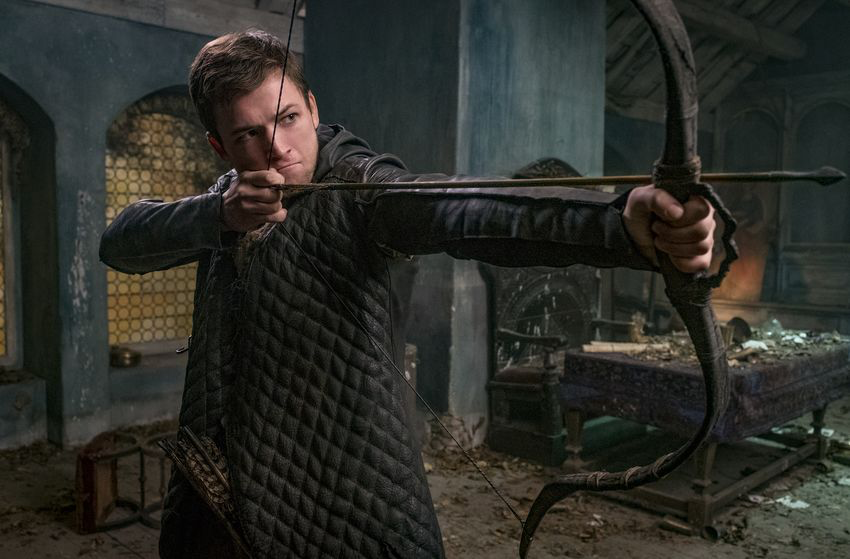 Three years ago, a script began circulating for a Robin Hood reboot. Originally dubbed Robin Hood: Origins, the script featured a plot that dwelled on the circumstances that led Robin of Loxley to turn into a crusader who steals from the rich and gives to the poor.

While an origin story might work well for a superhero film, it doesn’t work so well for Robin Hood, which suffers from a predictable plot and the lack of a compelling narrative. The movie screens in limited release at area theaters tonight and then opens wide tomorrow.

In this particular incarnation of the story, Robin (Taron Egerton) is a wealthy lord who lives in a giant manor. One day, he meets Marian (Eve Hewson) as she tries to steal one of his horses. The two fall in love and marry. But after Robin gets drafted into the army, he ships off to the Middle East to fight in the Crusades, leaving Marian behind for several years.

While in the Middle East, Robin develops a conscience, and he objects to the killing of Muslims, intervening when a soldier tries to kill Yahya (Jamie Foxx). As a result, Robin is sent home. When he arrives back in Nottingham, he finds that his manor has been ransacked, and Marian has remarried because she thought Robin died in the war. The sheriff (Ben Mendelsohn) has imposed a steep tax too, and the town is on the verge of revolt.

With the assistance of Yahya, who followed Robin back home and takes up the role of Little John even though he lacks a cadre of Merry Men, Robin develops an alter ego he dubs the Hood. Predictably enough, he goes up against the evil sheriff, setting up a climax that also finds our hero taking on an equally evil Cardinal (F. Murray Abraham) and even Will (Jamie Dornan), Marian’s new husband who isn’t exactly thrilled to learn that Robin didn’t actually die in the war.

Over the course of its nearly two-hour run time, the movie shifts from one thrilling fight scene to the next (arrows regularly wiz through the air), but without any significant plot (other than the one centering on how Robin intends to redistribute wealth), the film becomes a real slog. Egerton proved his ability to do the action hero thing with Kingsman: The Secret Service and its accompanying sequel. He's well-cast here too, but the film just doesn't have much else going for it.