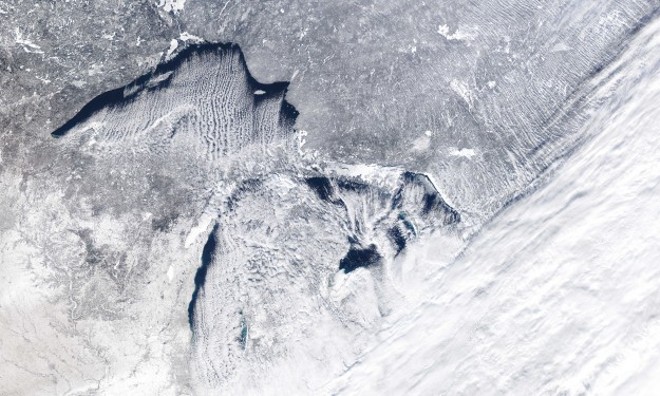 The Fourth National Climate Assessment by the U.S. Global Change Research Program, released last week, details the frightening effects of global warming. It also, briefly, addresses how climate change specifically might affect the Midwest. So if you were vaguely aware of its existence but mainly wondered something like, "Well, will Rocky River still get two inches of snow while Chardon gets two feet while everything else in the world goes haywire thanks to climate change?", well we have an answer for you, of sorts.

Lake effect snow happens when the air is cold and the lake is warmer than the air, but not yet frozen. The storms go over the lake, pick up the warm water molecules rising from it and then drop those water molecules in the form of snowflakes over the cold land, often in feet not inches. Common sense says if the air and Lake Erie both get warmer, then the lake effect snow goes away.

But not so fast on all that. It might be one of those "things will get worse before they get better" scenarios.

The USGCRP study say this about lake effect snow: “Along the Great Lakes, lake-effect snowfall has increased overall since the early 20th century. However, studies have shown that the increase has not been steady, and it generally peaked in the 1970s and early 1980s before decreasing. As the warming in the Midwest continues, reductions in lake ice may increase the frequency of lake-effect snows until winters become so warm that snowfall events shift to rain.”

So are we heading toward “lake effect” rain? According to the US National Oceanic Atmospheric Administration (NOAA), ice coverage in the Great Lakes from 1975 to 1997 had 7 years below average and 16 above; but from 1998 to 2017, it was 16 below average and 5 above. But less ice actually means more snow, right? Or at least that’s how the climatologists figure it.

This all might be the weather forecasting confusion we love so much. National Oceanic and Atmospheric Administration’s meteorologist and climate guru Tom DiLiberto calls it the “The Paradox of Lake Effect Snow.”

"When higher-resolution weather models are run to simulate lake effect precipitation with warmer lakes and less ice-coverage, the end result was an increase in lake effect snow downwind of the Great Lakes and farther inland, which is consistent with both theory and other studies,” he wrote last year. “So an increase in lake-effect snow is possible… for a while. Of course, in the end, any period of increased lake effect snow would be a temporary one. Eventually, the snow turns to rain as our thermometers continue to march upwards with greenhouse gas concentrations.”

Scene takes it this way. We might have more or less snow from climate change, depending if climate change is a big or little or medium temperature change. Rocky River and Chardon may have the same amount of snow or maybe not the same amount. Dick Goddard will be asked un-retire and weigh in. Film at 11.