Kyle Korver, Traded to Jazz, Was Most Deadly from Distance on Cavs 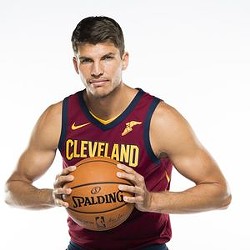 Kyle Korver, sharp shooting extraordinaire and consummate pro, has been traded by the Cavaliers to the Utah Jazz for guard Alec Burks and two future second-round picks, ESPN and others have reported.

Cleveland.com has the implications of the trade and reactions by teammates here. (One the most exciting upshots: Rodney Hood's wife is good friends with Alec Burks' fiancee! Scene is hopeful for a warm and lasting Cleveland friendship for the Hoods and Burks.)

Korver leaves behind an impressive legacy with the Cavaliers, chief among them his blistering shooting from distance. Known as a sniper, the Creighton alum shot more accurately from three-point land as a member of the Cavaliers than he did with any previous team. His .454 shooting percentage barely edged out his .452 mark as a member of the Atlanta Hawks' dynamic starting unit.

Korver's three-point shooting percentage is the second-highest in Cavaliers' history, behind only Steve Kerr, among players who attempted more than 100 three-point shots. In only 124 games played with the Cavs, (one complete season and portions of the 2016-2017 and 2018-2019 campaigns), he managed to ascend to 13th on the franchise leader board in total three-pointers. In his final two games in a Cavs uniform, the win against Houston and the loss against Minnesota, Korver knocked down a staggering 9 of 12 (75 percent), demonstrating to the league that at nearly 38 years old, he's still among the league's most dangerous shooters.

Korver had asked to be traded if LeBron left the Cavaliers, and when he wasn't this offseason, he didn't make a fuss. The trade to Utah gives Cleveland some flexibility and trading chips while letting Korver play for a potential contender in a Western Conference jam-packed with playoff aspirations.

We'll miss his hyperactivity without the ball and his pure pure stroke. No one dashed around the court trying to get open like Korver did.