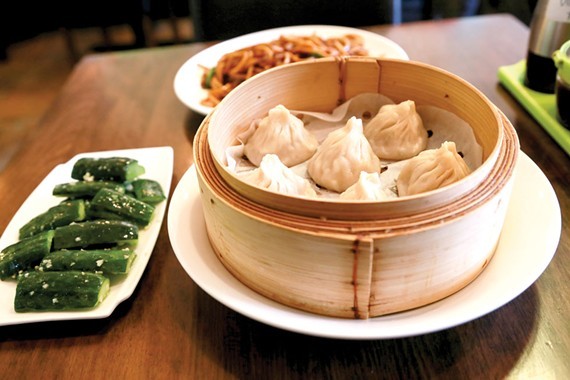 There were plenty of our Cleveland food-related stories that caught the attention of our readers — including restaurant openings, closings, mouse infestations and even a story about an Ohio City bistro that used the c-word in reference to some Facebook commentors. But through all of the industry drama, our food editor Douglas Trattner managed to highlight the restaurants and breweries in the area with his trademark brutal honesty.

Here are the five most-read Scene restaurant reviews of the year:

1. Soup Dumplings and Chinese Noodles Will Keep Us Coming Back to LJ Shanghai, the Newest Addition to Asiatown
Choice quote: "The service is swift, the portions robust, the prices modest and the surroundings modern and comfortable. But it's the food – oh, those wicked little soup dumplings – that will keep us coming back on a regular basis."

2. Lox, Stock and Brisket Arrived With Almost No Notice to Dazzle the East Side with Jewish Deli Perfection
Choice quote: "Stop me if you've heard this one before: After nearly 20 years away from Cleveland, a mysterious Italian chef sneaks back into town, opens a Jewish deli practically overnight, and quickly becomes the talk of the east side. You haven't? Neither had I. But that's precisely the way it went down when Anthony Zappola opened Lox, Stock and Brisket in University Heights last month."

3. Ushabu's New 13-Course Tasting Menu is a Michelin-Star-Worthy Adventure Through Cleveland and Japan;
Choice quote: "There's been a quiet revolt against tasting menus taking place in America and I roundly fall into the camp of insurgents. Few diners want to plant their butts in a seat for four hours while the chef attempts to show off. At Ushabu we breezed through 13 courses in under two hours, thanks to crisp pacing that anticipated our every move. And at $150 per person, it is a remarkable value."

4. Prepare to Feast at Rising Grill, the Newest Korean Barbecue Joint in Asia Town
Choice quote: "Sure, it takes a bit of effort to get settled into a groove at a Korean barbecue joint, but once you do, there are few more exhilarating dining experiences. Bring the right tablemates and you're in for a boisterous, delicious and, at times, chaotic meat-filled ride."

5. Five Decades in, Balaton Remains an Eastern European Comfort Trip You Shouldn't Miss
Choice quote: "At Balaton, a steady drumbeat emanates from the kitchen with reliable consistency. Bang, bang, bang. That's the sound of veal cutlets being pounded into carpaccio-thin leaves, which get breaded and fried until puffy, craggy, golden and crisp. They arrive in the form of schnitzel "sandwiches" ($11.95) or as an entree. Know going in that Balaton is like Alice in Wonderland, where "small" ($17.95) is large and "regular" ($24.95) is anything but."