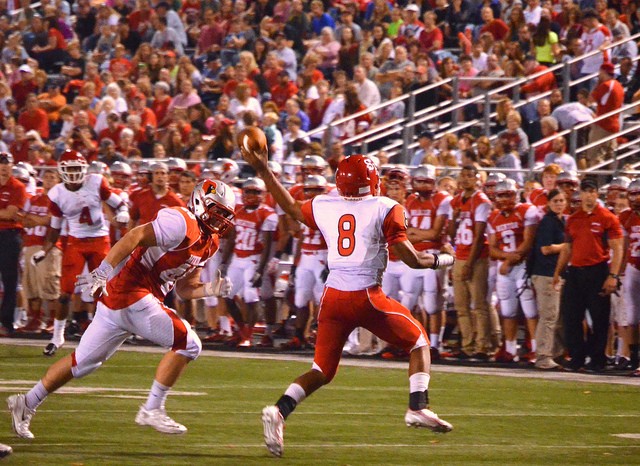 The Greater Cleveland Conference for Ohio high school athletics is made up of Brunswick, Elyria, Euclid, Medina, Mentor, Solon, Strongsville, and Shaker Heights. That is set to change next year.

In a public statement issued yesterday, Shaker Heights announced that it will leave the conference and join the Lake Erie League, to which it once belonged, starting in the 2020 school year.

The reasons behind that decision were laid out in the release and included an improvement in leadership in the LEL since Shaker left in 2012, issues with travel and geography while competing in the GCC (the schools stretch across four counties and, as such, there were plenty of extra miles and late nights), and last but not least, concerns that Shaker's students were on the receiving end of racial slurs from students at other GCC schools.

"While our student-athletes have dealt with each of these incidents in a remarkably poised way, it is something that must be given serious consideration when making a decision about conference affiliation," the release said. "The lack of diversity and cultural sensitivity in some of the communities in the GCC is a real concern."

"I was just very concerned something bad was going to happen," Shaker boys basketball coach Danny Young told Cleveland.com regarding some of the slurs directed at his players. "Thank God I have disciplined kids who don't respond to that kind of stuff."

The full statement can be read below.

The Board of Education on Tuesday gave notice it plans to accept the invitation for Shaker Heights to rejoin the Lake Erie League (LEL) beginning with the 2020-2021 school year. The Board unanimously approved the move out of the Greater Cleveland Conference (GCC) pending an impact review in January 2020 of a series of benchmarks, such as scheduling, transportation and costs. The Board will ensure that all Shaker athletic teams understand and are comfortable with this sports league change prior to the start of the 2020-2021 athletic season.

The purpose of this change is to improve overall athletic competitiveness, reduce travel costs, and better support the socio-emotional development of our students. The change allows some sports greater flexibility to schedule out-of-conference games while other sports are not impacted at all. For example, the change will improve:

Sports Conference Leadership: The influx of new leadership in the Lake Erie League (LEL) over the past few years has resulted in a much higher level of professionalism and cohesion for the league. The league is in a much healthier and stable state than it was in 2012. The potential addition of Shaker Heights and Garfield Heights would further strengthen the league.

Geography/Travel: A major drawback of remaining in the GCC is travel time. Schools in the conference are located in four different counties, meaning that student-athletes find themselves returning home at late as 10:30 p.m. on a school night. With seven of the eight potential LEL schools located in Cuyahoga County, travel time would be drastically reduced. Travel costs, especially the need for contracting with independent bus services, would also be reduced.

Diversity/Cultural Sensitivity Issues: Our student-athletes have had to deal with multiple instances where they have been the subject of racial slurs on the athletic playing fields. While our student-athletes have dealt with each of these incidents in a remarkably poised way, it is something that must be given serious consideration when making a decision about conference affiliation. The lack of diversity and cultural sensitivity in some of the communities in the GCC is a real concern.

Some sports are impacted by this change and others sports are not. This change in leagues was recommended by High School Athletic Director Don Readance, who informed and received the support of Shaker coaches for this change to better the sports experience of our students.