The Tangier to Host a Benefit Screening and Concert for Local Pianist Kofi R. Boakye 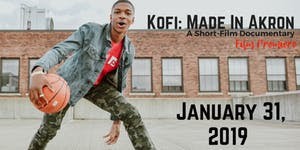 In a short amount of time, 19-year-old pianist Kofi R. Boakye has put together a pretty impressive resume. The Akron musician has toured Germany and Prague with the Miller South Show Choir. At the age of 15, he was accepted into the University of Akron School of Music’s Jazz Program, making him the youngest African-American pianist to ever be accepted into a collegiate-level jazz program at the University of Akron.

In 2014, President Barack Obama gave him the President’s Education Award for Outstanding Academic Excellence. Last year, he won the Silver medal in the NAACP ACT-SO National Competition, making him the first person from Akron to ever win that accolade.

At 5 p.m. on Thursday, Jan. 31, the Tangier in Akron will host a benefit screening of Kofi: Made in Akron, a documentary film about the young star, to support Boakye as he prepares to head off to Berklee College of Music, where he'll start school in the fall.

Boakye has set-up a tax exempt 529 savings plan to help cover the cost of his education, and proceeds will go into that fund.

The event includes a VIP reception, a silent auction and raffle, the premiere of the documentary film, and a performance by Boakye and his band. Tickets start at $50.