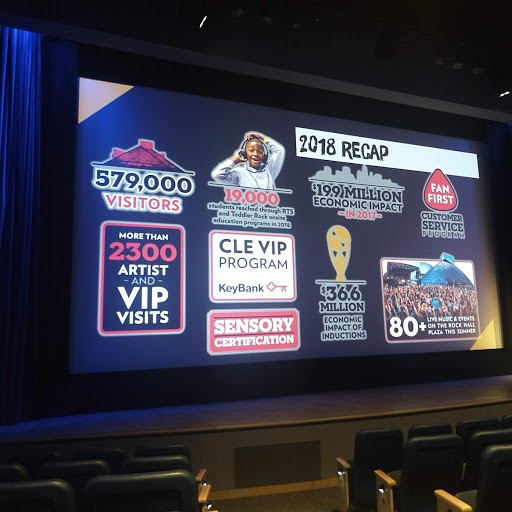 Earlier today, the Rock Hall held a press conference to announce its upcoming schedule of events. President and CEO Greg Harris said the aim was to recap 2018 and then preview what will happen at the Rock Hall in 2019.

“We want to let you know that we have a broad staff and assets and lots of stories to tell,” said Harris. “We want to work together to make this a great town and to continue to thrive.”

He emphasized that the Rock Hall was launching new digital platforms and “ramping” up the digital side of its operation.

Harris then showed a four-minute video featuring some of the highlights from 2018.

“It’s been so fantastic,” he said of 2018. “It ranged from having the guys from the Moody Blues and Bon Jovi here to hosting the High School Rock Off and partnering with the Maltz Museum on the Stop the Hate campaign.”

In total, the Rock Hall had more than 5000,000 visitors last year and more than 2300 artist and VIP visits. The economic impact of 2017 was a reported $199 million, and Harris said that number will likely be higher for 2018 once the total is tallied.

This month, Rush bassist Geddy Lee brings his bass collection to the Rock Hall for an exhibit that will be up for a short window of time. An inductee event comes to the Rock Hall in March, and there will be a special exhibit to mark Woodstock’s 50th anniversary in May.

A Warped Tour exhibit opens in June in conjunction with a festival celebrating the tour's 25th anniversary, and an “interactive garage” will open on the museum’s second floor in July. Visitors can record music in the garage once it opens.

“They’ll be able to feel the power of rock ‘n’ roll,” said Harris.

Harris also spoke about Play It Loud: Instruments of Rock & Roll, an exhibit that opens at the Metropolitan Museum of Art in April and then comes to the Rock Hall in November. Other traveling exhibits include Louder Than Words, Mellencamp and Herb Ritts: The Rock Portraits.

Returning programs include MLK Jr. Free Admission Day, the Tri-C High School Rock Off, Black History Month, Rock Hall Honors (a retooled version of the Music Masters Series), Rock Hall Nights and the Rock & Roll Holiday Ball. There will also be a film series from February to June and a watch party for the Inductions.

The Rock Hall will also host concerts at lunch and at sunset throughout the summer. Summer in the City will return this summer, and the Rock Hall will have extended hours in July and August.

Harris said the Rock Hall works with more than 550 local organizations and it has launched an education-oriented website that it continues to develop.

There will also be a new studio for the Rock and Roll Hall of Fame Sirius station.