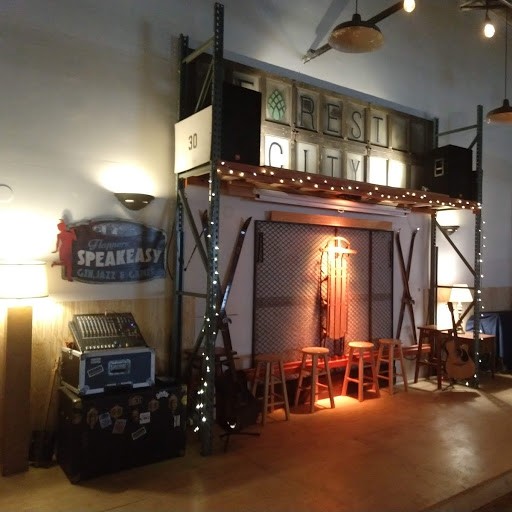 Originally, when Jay Demagall and his business partner Matt Mapus decided to start a small business in the brewing industry, they weren’t looking to buy a building. But three years ago, when they came across an old brick building on Columbus Rd. in Tremont, they decided it was too good of an opportunity to pass up.

After they bought it, they christened the place the Forest City Brewery.

That was three years ago, and the place has found success despite the competition from Cleveland's overcrowded local craft brewery scene.

At the beginning of this month, the brewery started a regular live music program that will take place in its retooled beer hall, a space that was formerly a dance studio. Forest City Brewery has hosted musical acts in the space in the past, but at the end of last year, Demagall built a stage and added a sound system to the room, which he’s dubbed the Waldorf Beer Hall.

“After the dance studio left, we realized we needed to develop the beer hall quicker than we thought,” says Demagall one afternoon from the brewery. “It’s been slow process of bringing it up to speed and getting tables and chairs and doing some painting.”

It all started about two years ago when Platter started playing on Sundays at the place.

“We told him we could just use the space to practice,” says Demagall. “In 2017, we asked him to do a regular Sunday gig, and I got to know [local singer-songwriters] Brent Kirby and Ray Flanagan through him. I got to know [local mandolin player] Bill Lestock too. They’re a good group of musicians and all buddies. They would come and listen to Thor on Sundays, and then, I started recruiting them to play. Next thing you know, I had my Sundays filled up.”

Demagall likens the approach to that of a Swiss army knife.

“It’s not just for musical acts,” he says of the hall. “We have other performing acts in here too. We have a story club and improv groups and a cinema group. We also rent it out for weddings and corporate events. It fits all the things we have going on here, which is what beer gardens were back in the day too.”

While Demagall says he still has some painting to do, the room, which also features a bar and some vintage beer signs, has benefited from the recent facelift.

“We’re very happy with the way it’s turned out, and people seem to really like it,” says Demagall, adding that the vaulted timber ceilings contribute to its terrific acoustics.

Bands play every Sunday from 3 to 6 p.m., and Demagall hopes to host a small music festival sometime this year too.