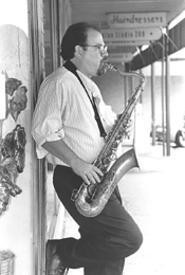 Yesterday, Cleveland lost one of its great musical treasures. Saxophonist Norman Tischler, who had esophageal cancer, passed away. A true character, he was a terrific musician and beloved by the local music community.

Tischler, who taught brass and woodwinds at Northshore Music in Euclid and played with the swing/blues band Blue Lunch, also subbed in other Northeast Ohio bands, playing flute, clarinet, and sax. He worked as a strolling saxman at weddings and anniversaries and conducted the Workmen's Circle klezmer orchestra.

"In 1952, my mother gave my sister and me one harmonica and said, 'Whichever one of you learns to play it can keep it,'" he once told Harvey Pekar for a Scene article. "My sister didn't care. I got it and played it by ear. I played trombone in elementary school through high school but picked up clarinet in seventh grade."

In high school, Tischler took sax lessons at a music school and he began performing at local hotels and received his first exposure to klezmer music. Tischler turned down a chance to go to Juilliard and went NYU, where he majored in music education, and to grad school at Ball State. After college, he came to Cleveland, where he worked in the West Side Community House's arts program and worked in the Upbeat show's house band. He would then join the group Tiny Alice.

"Not long after that, we were the house band at the [now defunct jazz club] Smiling Dog Saloon and cut an album for [the label] Kama Sutra," he explained to Pekar. "We ended up touring with Sha Na Na and the James Gang, played two weeks in New York at the Bitter End, and later in Central Park with Sha Na Na. We also did a bunch of gigs with Cheech and Chong. They were hilarious, but very professional. In those days, we were known as an anti-[Vietnam] war band. We did a gig at the Virginia Military Institute with Richie Havens, and they loved us."

"Norman Tischler was a beautiful soulful cat, a fabulous musician and hilarious raconteur," posted guitarist Colin John. "I'm fortunate to have known him and made music with him over the years."

"I am very saddened by the news that a fellow musician and friend had to take his final ride home playing his ass off for sure and smiling all the way," wrote Anthony Lovano. "It was a pleasure to have on the CBS Blues Cruise joining in with my set last year and showing up at my Tuesday Jam Session at Tradewinds Lounge to join the first set and so many gigs in everyone's band."

Tonight's All Star Jam Session at Tradewinds Lounge in Euclid will be a celebration of Tischler 's musical life.