Updated renderings for the proposed nuCLEus project uploaded to Stark Enterprises' website show that plans for the jenga-like tower have been abandoned and the ambitious height of the tower itself, originally pinned at 54 stories, greatly reduced.

(Note: The renderings are currently offline but were saved by a Reddit user. The original rendering can be found at the bottom of the post.)

The renderings track with some news developments last year.

The first: The decision by CMSD that it would not consider a unique Tax Increment Financing proposal that would have delivered CMSD a one-time $18 million payment in lieu of 30 years of property tax collections, estimated at about $120 million. CSMD CEO Eric Gordon told the Plain Dealer that due to "changing circumstances" the deal was simply not compelling. "There's the very real issue of why would we be giving tax relief to this builder or any builder ... when taxes are going up," he said.

The second: A proposed bill, for which Stark had lobbied, that would have created a 10-percent rebate on "transformational mixed-use development" projects that were 20 stories or taller, stalled in the Ohio legislature. While the bill's sponsor, Rep. Kirk Schuring (R-Canton) told the Plain Dealer at the time that it would likely see progress and pass in 2019, a new version of the bill would see projects of 15 stories or taller qualify.

Stark VP Steve Coven had in March appeared before a statehouse committee and championed the grand vision.

"Can you imagine if the Terminal Tower Complex was never built, what the Cleveland skyline would look like?" he said. "You can’t, because it is forever associated with our skyline. It is our goal that our great-grandchildren will be saying the same things about the nuCLEus project 100-plus years from now."

The company late last year, following the TIF and bill developments, acknowledged the original $500 million, 54-story plans had been scaled back.

"Revised plans are more modest," the PD reported, "with shorter buildings, fewer apartments, more office space, no hotel — and a smaller budget. Stark also has broken the development into phases, spreading out the investment over time."

Of course, should it ever be built, it would still qualify as a massive construction project and addition to downtown's skyline, but the designs certainly don't inspire this sort of reaction. If and when also remain key words. In a story about Shake Shack, which had been slated to find a downtown Cleveland home in nuCLEus but which announced it would instead open in the Garfield Building, Ezra Stark told the PD, “We’re still working with the city and the county, finalizing the private-public partnership."

Stark recently sold its headquarters, a five-story building on Superior Ave. which had been on the market for years. 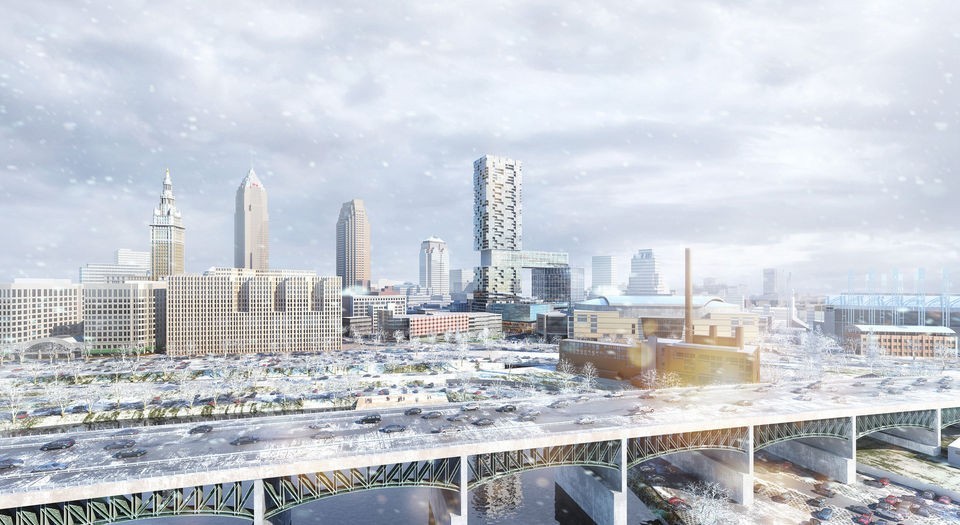