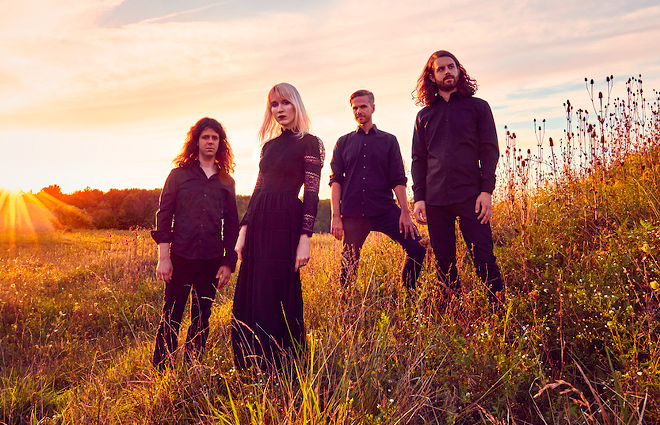 Niights guitarist Frankie Maraldo and singer Jenna Fournier found each other at just right the moment.

Maraldo initially formed the local indie rock group that features shoegazer guitars and a distinctive dream-pop sound ten years ago. But because the band was so unstable, it didn’t play more than a handful of shows.

Maraldo even thought of pulling the plug.

So when he came across Fournier, a singer and artist who had just put her indie rock band Sparrows & Arrows to sleep, he thought it might be good to invite her to join the group as a way to jumpstart things and get back on track.

“We initially just set out to jam and feel it out,” says Fournier one recent afternoon from her Ohio City apartment. The band will release its new album, Hellebores, on Friday, Feb. 15. It plays a release party on Friday, Feb. 8, at the Happy Dog. “We both had songs written. I was looking for people to play my songs, and they were looking for a singer to come in and sing their songs. We ended up collaborating really well, and I was impressed with the musicianship.”

Because Maraldo wanted to tour, it made it difficult to find members who could leave their day jobs behind to hop in a van.

“The hardest part was keeping other members in the band and finding people who could hit the road,” he says. “We’ve gotten out a few times but not as extensively as we were looking to get out. We were waiting for the right opportunity and the right way of doing it.”

The band initially started recording its debut, Whisper, several years ago. But those first sessions didn’t go well, and the group ended up discarding them after accumulating what it estimates to be $1000 in recording expenses.

In 2014, the group inked a deal with Tragic Hero Records. The label saw potential in Whisper and wanted to re-release it, so it enlisted Jim Wirt, a producer who’s worked with national acts such as Incubus and Fiona Apple, to tweak the songs at his Cleveland-based Crushtone Studios.

“When [Tragic Hero] signed us, they wanted to remix the album, and they thought they could make it better with Jim Wirt,” says Fournier. “We were willing to give him a chance. We had never worked with him before, and he had a good track record of working with other bands. We liked the original Whisper, but that’s what the label wanted to do, and that was part of our agreement. We thought it would be a good move.”

The band cites the Smashing Pumpkins and Cranberries and My Bloody Valentine as influences, and you can hear those influences in the songs on the disc.

Those influences also come across well on Hellebores. With their high-pitched vocals and waves of shimmering guitars, songs like the beautiful, Cocteau Twins-like “Generators” and the careening “I’m So Into You” evoke the best British alternative rock of the ’90s.

For the album, the band had to assemble tracks locally and then send them out to the other band members who lived across the country.

“We started writing a couple of songs, and I fleshed them out in the studio and sent them out to the band members and let them write their parts,” says Maraldo.

“Recording this album was very different from having a band that rehearses, rehearses and then you go in and track it,” says Fournier. “There was a lot of experimenting in the studio.”

Some songs were old ideas that the band revisited.

“We had to orchestrate things on the fly,” says Maraldo.

“Though he remixed Whisper, it was first time working with Jim Wirt,” says Fournier. “Tracking with him is fun. There was a lot of conflict after that. You have my vision and Frank’s vision and Jim’s vision, so you have this three-headed monster trying to make an album. Everybody was able to compromise in the end, and we have something that we’re all happy with.”

The album commences with an evocative intro of reverb-drenched guitars that sets the tone.

“We like the old-fashioned idea of an album that needs to be listened to from beginning to end even though in the Spotify world, bands often make their catchy singles the first song because they know people will hear that first,” says Fournier. “We didn’t want to play that marketing game. We wanted to start with something that’s smooth and provides a transition and flows.”

Hellebores’ “Intro” purposefully evokes the Cure’s opening to its 1989 album Disintegration, which commences with “Plainsong.”

“I like albums that do that and go off a little bit,” says Fournier. “We’re at a time in music when people want to pump out singles and they don’t appreciate the art of the album as a whole. We don’t want to cater to that.”

“The genres on the album are so different,” says Fournier. “You can stream them back to back, but we can tell iTunes that one part is dream pop and one part is heavy rock. It’s our way of catering to the modern music world without compromising the music. It’s a weird time for digital music. We felt like it made sense to divide the album in halves. It highlights the fact that we have these two sides. We have this poppy twinkly side, and we have this heavy side. It’s like we’re beating it over people’s heads. We’re saying, ‘This is what the band is. Don’t pigeonhole us.’”

Input from the other band members helped expand the band’s sound.

One highlight, “With Bated Breath,” tracks in at 11 minutes and recalls Mellon Collie and the Infinite Sadness-era Smashing Pumpkins with its propulsive mid-song jam.

The song had a particularly long gestation period. It’s one of the first tracks that Marado ever wrote for Niights.

“We recorded a 13- or 14-minute version of it after Whisper’s first release during an overnight session and that came out pretty good,” says Marado. “We released it as a tour-only song in Japan. They want you to bring some merchandize that’s specific to that market. The label we’re on now heard it and wanted us to re-record it with Jim [Wirt], who’s more of a pop guy. But we still took the ideas of what we did on that Japanese recording and consolidated it by about three minutes and recorded with a new tuning and with a more condensed, ambient section in the middle. We weren’t jamming it like we were the first time we recorded it.”

When the band plays it live, it can stretch it out to 25 minutes or shorten it and skip the jam in the middle.

This winter, the band will have the chance to support the album with a tour with indie rockers, Elvis Depressedly.

Come August, the band will also return to Japan for the fourth time. The group initially inked a distribution deal with a Japanese label several years ago, and the label continues to book shows for the group.

“For the first tour of Japan, I went solo,” says Fournier. “It was definitely surreal. It was well received, and people at every show came up to me wanting autographs. They asked me to come back with the whole band, so I came home and told the guys that he needed to find the money to bring the whole band, and we did. It’s a really different music culture. The venues are very organized. The audiences are very quiet and appreciative. It’s a good feeling.”