Cher Concert at the Q Gives Fans Their Money's Worth 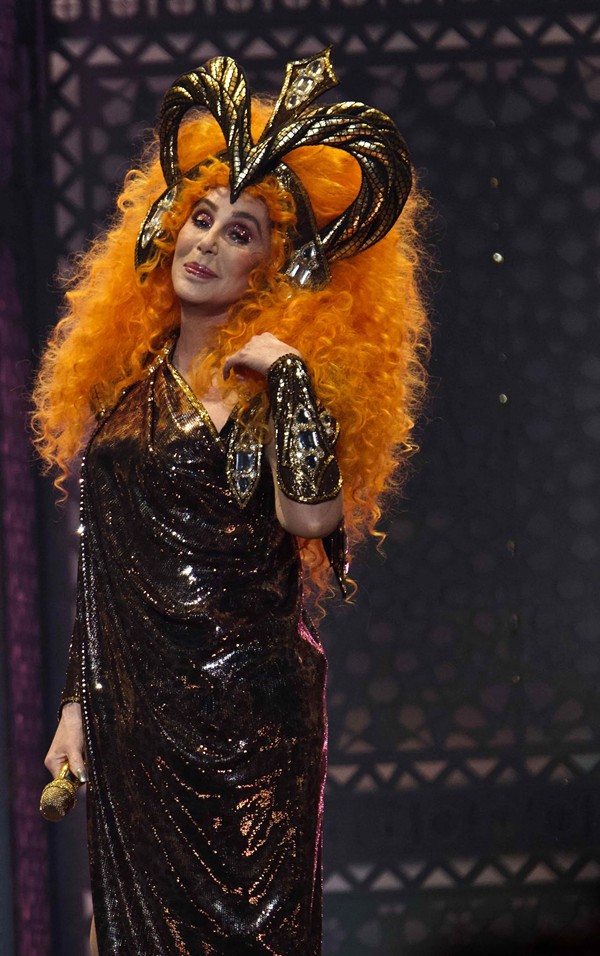 As the crowd anxiously awaited Cher to take the stage last night at the Q, she peeked out from the side of the stage to wave and say hello to her fans. Wearing a gold Viking helmet over a huge tousled mound of apricot hair, Cher looked giddy as she shared this quick secret wave. Then, the music started, the lights dropped and the curtain fell to reveal a stage full of dancers as Cher stomped her gold boots, performing “Woman’s World.” Looking Teflon-tough in her showgirl armor, Cher made it perfectly clear that fans were about to get their money’s worth as she shined and sparkled while singing "Strong Enough." Strength and confidence beamed off of her like the sun, blinding the crowd with her radiance.

Cher took center stage to chat with the crowd about her career, her journey to fame, her failures and her successes. She reminisced about being so broke that Sonny Bono and she would perform at rundown dinner theaters, the late-night dinner crowd paying no attention to them, so she started making the band and Sonny laugh out of boredom. That banter between them was what ended up creating what became The Sonny and Cher Show. The motif of her stories was resilience, turning trash into treasure. She told the crowd that she is 72 years old, and then ended her story time by saying, “What’s your granny doing tonight?”

Cher briefly left the stage for a costume change only to emerge riding a giant animatronic elephant for Gayatri Mantra. A montage of footage from the 1960s played on the screens while Little Man played on the speakers. Cher emerged in a new costume, wearing sequined striped bellbottoms and a purple fur shrug, her hair long, black and poker straight. Her dancers were in classic '60s clothing as she sang "The Beat Goes On."  The most touching moment of the night was when a large frame descended, showing black and white footage of Sonny singing "I Got You Babe" as Cher stood next to him, gazing at his image with love as she sang along with him.

Cher then morphed into full showgirl glitz as she performed "Welcome to Burlesque," her dancers twirling and crawling around her like sex nymphs. Then it back to the '70s for a trio of Abba hits, "Waterloo," "SOS" and "Fernando." The music swelled and the emotion was heavy in the air like a dense fog when Cher performed "After All," from the 1989 film Chances Are. She performed Elvis Presley’s "Heartbreak Hotel" as footage of her dressed as Elvis played on the screens. She delivered a gritty and forceful rendition of "Walking in Memphis," and "The Shoop Shoop Song (It’s In His Kiss)" and "Bang Bang" were fun and flirty.

And then, the moment came — the moment when Cher returned to the stage in the outfit. It's the outfit that everyone knows and everyone wants to see, and it happened, and everyone lost their minds. Cher skipped onto the stage wearing the sheer black catsuit that she made so famous in her music video for "If I Could Turn Back Time."  Her curly black hair bounced, and her butt cheeks were exposed, and she was in her element. This is Cher. She was truly there for all to see in her black leather glory.

Cher sang "I Found Someone" with the passion of someone performing a song for the very last time ever except it wasn’t the last song ever because then came "If I Could Turn Back Time." Fans were on their feet belting out the cathartic hit like possessed demons worshipping their dark lord. Every face looked so happy, but none looked happier than Cher’s. But the night wasn’t over yet. Cher changed costumes one last time, emerging in a silver-beaded transparent dress, a red wig and metal crown for "Believe."  It was a sweet, nearly wholesome comedown from the earlier debauchery, and as she left the stage, her back to the crowd, she did a little shoulder shimmy, not knowing if anyone was even still looking at her, but it didn’t matter, she was going to keep on dancing even though the night was now behind her.

Rodgers was not shy about letting the crowd know who he is, who he has worked with, and that he was inducted into the Rock & Roll Hall of Fame in 2017. He performed an onslaught of hits he wrote for legends like David Bowie, Sister Sledge and Diana Ross. Rodgers shared that he was diagnosed with an aggressive form of cancer years back, and the doctors didn’t think he would make it. That was when Daft Punk and Pharrell Williams reached out to him to collaborate, and they created their smash hit "Lucky."

Rodgers announced he is now 100% cancer free and went on to perform "Lucky," the crowd on their feet, celebrating life. Rodgers reminisced about his days at Studio 54 and instructed the crowd to imagine the venue was the greatest disco club in the world and dance. Dance they did as Rodgers and Chic ended their uplifting set with "Le Freak" and their feel-good hit "Good Times."