Teachers at Summit Academy in Parma Vote to Authorize Strike, Becoming Only Third Charter School Union to Do So 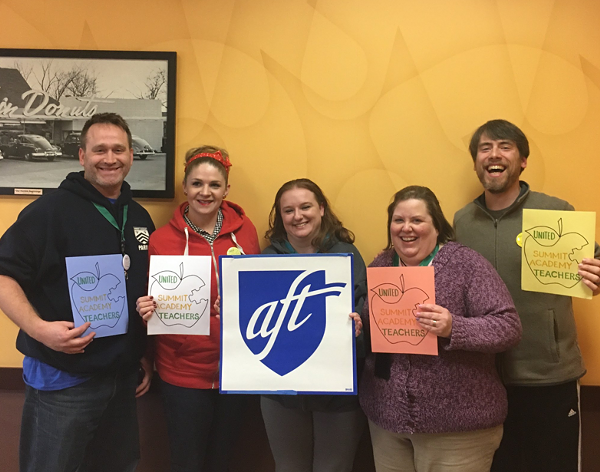 On Feb, 1, 2019, members of the teacher’s union at Summit Academy in Parma authorized a strike effort after months of negotiations with Summit Academy Management. The teachers and intervention specialists have yet to publicize a strike date and are hoping that they will not have to strike at all.

Jill Jones, a coordinator of field services at the Ohio Federation of Teachers, told Scene that the union has reached out to management in an attempt to go back to the negotiating table. In response to a request for a statement regarding the recent union vote, Summit Academy Management, the school’s management company, told Scene that:

“Summit Academy is disappointed by the union’s recent vote to authorize a strike at our school in Parma. Our team is waiting to hear from the union to schedule additional discussions and we remain hopeful that those discussions will reach a workable solution for both parties without threatening the operation of the school and focus on the students their members signed contracts to serve.”

But almost a week after the strike vote, the teachers say that they have yet to hear back from the school administration.

In March 2018, the teachers at Summit Academy in Parma, a local chapter of a national charter school network, organized a union with the intent to negotiate with the school’s management for better working conditions. Working with the Cleveland Alliance for Charter Teachers and Staff (ACTS), the Ohio Federation of Teachers (OFT) and the American Federation of Teachers (AFT), the union began negotiations in 2018 and have yet to reach an agreement with the school’s management.

The efforts to unionize began in fall 2017, according to Kelly Granda, a K-12 art teacher in her sixteenth school year at Summit. Granda recalls that that the teachers were thinking of the next school year and were concerned about teacher turnover and consistency. As the school is geared towards students with unique learning needs, such as ADHD, autism and learning and behavioral disorders, consistency is a key element of a positive learning experience. When she asked others why they thought the turnover was so high, Granda was surprised to find that pay did not appear to be the main issue, rather extra duties and the loss of support staff played a more significant role.

“We knew what we were signing up for as far as the pay,” says Granda, “but teachers were getting burnt out because [you’re] thinking you’re going to be doing really great things for these kids and when you don’t have the resources to help them, it’s frustrating.”

Many of the teachers at Summit work with students with a variety of conditions that require individual education plans (IEPs) and more one-on-one attention. The teachers and specialists report that the class sizes and case loads are too large to suit the students’ needs. Todd Ratica, now in his eleventh year teaching social studies to middle and high school students at Summit, notes that on top of losing staff, the school has increased enrollment, leaving teachers and specialists spread too thin and classroom environments that weren't conducive for student learning.

Ratica remembers that when he began at Summit, the maximum number of students per two-teacher classroom was sixteen, “That’s what Summit Academy advertises to parents,” he says. However, that number has grown in the past few years, while the school staff continues to dwindle, forcing the remaining teachers and specialists to fill additional roles. Yet, despite being spread so thin, teachers do not have protected lunch or planning periods. They have no designated time to eat, prepare and speak with other teachers during the course of the day.

Salary wages and benefits are an important component of the union negotiations, according to Jones, not only because educators should earn a competitive living wage but because it can explain some of the turnover. Jones notes that educators at Summit make, on average, around $30,000 and many do not stay when they are offered a better salary at a different school.

Meanwhile, the Summit Academy Management CEO recently received a $31,000 raise, according to the organization’s 990 tax-forms. A report from 2010 also indicates that Summit Academy Management illegally paid their board members by pooling funds from all of the schools. The CEO, John Guyer, told Cleveland.com in October 2018 that his last raise was in 2015 when he became Interim CEO and that the salary was set by the Board of Directors.

The Summit Academy Management team has included a webpage on their site highlighting the negotiation proceedings. According to the Management updates, they recently allocated $16,250 in raises specifically for the Parma educators and the union deferred individual allocations to the school’s administration. The page also states that the Management team offered additional pay for teachers that go without a lunch and/or planning period.

Granda and Ratica agree that the offers from the Management company are insufficient for the student’s needs. “It doesnt seem like the offers they’ve given us are fair offers for the students,” says Ratica. “We know how special our kids are and what they deserve and what they’ve offered us is nowhere near what our students deserve.”

Granda agrees. “Our students deserve consistency and that’s really important to them feeling safe and secure. It’s a question you get used to hearing every year- ‘are you going to be coming back next year?’ and I think that its hard to keep hearing that and seeing that [the students] have anxiety about losing the teachers they love.”

Unionizing at a Charter School

Traditional public schools have a long history of unions and strikes. Indeed, in just the last few weeks, teacher unions in Los Angeles and Oakland have made headlines for their strike authorizations and strike activities.

Similarly, while the Parma City Schools had a significant union-management disagreement a few years ago, Summit Academy in Parma is only the third charter school in the nation to authorize a strike. In December 2018, educators at Acero, a Chicago-based charter school held the first charter school strike. The four-day strike ended with an agreement that included a reduction in class sizes and increases in teacher salaries. However, the strength of the Acero network of schools included over 500 union members across fifteen schools. The union of educators at Summit Academy’s Parma location is 24 members strong and other Summit Academy locations have yet to unionize.

Cleveland ACTS is an affiliate of OFT that assists charter schools in their union efforts. In 2016, two schools within the I Can charter school network in Cleveland also voted to unionize and similarly became members of OFT and Cleveland ACTS. What benefit does unionizing provide over individual attempts to change the organizational structure and environment? Collective bargaining.

The teachers report that their contract seemed to indicate that Summit Academy Management could fire teachers and specialists without any explanation and that the contract appeared to be a one-sided list of rules. Indeed, in 2015, Summit Academy Management came under fire for suing teachers that quit mid-way through the year. With a union in place, Granda and Ratica now feel that they are supported and have a voice in the education process.

Christine Kindel, a fourth-year high school English teacher adds, “I think it’s important for me to be able to explain why certain issues are important from the teacher perspective. It’s nice to have that voice so if there is something our students need, it can be advocated for.”

Granda echoes that idea. “We’re hoping that this is a chance to make our school the best place possible for the families we serve and truly live up to our school’s mission statement,” she says.

The teachers report that when Summit Academy Management learned that they were interested in unionizing, the HR department presented a grim view of what The Union would do to them. Granda recalls Management presenting the union as an outside entity that would make decisions for the teachers and potentially create friction between the teachers and students. Granda, Ratica and Kindel believe this is an inaccurate depiction of the union efforts.

“The management company keeps presenting this as if it’s something the union is doing,” says Granda, “and we want to make it very clear that we are the union, it’s not something that’s happening to us- it’s happening for us and our students.” Kindel further notes that their union efforts aren’t only for themselves or even the children currently at the school. “We want to help create something sustainable.”

Ratica, Kindel and Granda are passionate about their work at Summit Academy and want to stay with the school. The teachers hope that they can reach a conclusion with the management company before enacting the strike authorization. The statement above from Summit Academy Management’s communications representative, Jeff La Rue, appears to indicate that the Management is awaiting further negotiations, as well. Granda feels that the idea that teachers could or should just leave if they’re unhappy with the Management is overly simplistic and even erroneous. Having been with the school for over fifteen years, Granda has seen students make it all the way from kindergarten to graduation. “Our students go to Summit Academy in Parma, we don’t have the opportunity to go somewhere else and work with our students.”