Great Lakes Theater Puts on a Lovely Production of 'Witness for the Prosecution,' Even If the Story's Twists Feel Dated 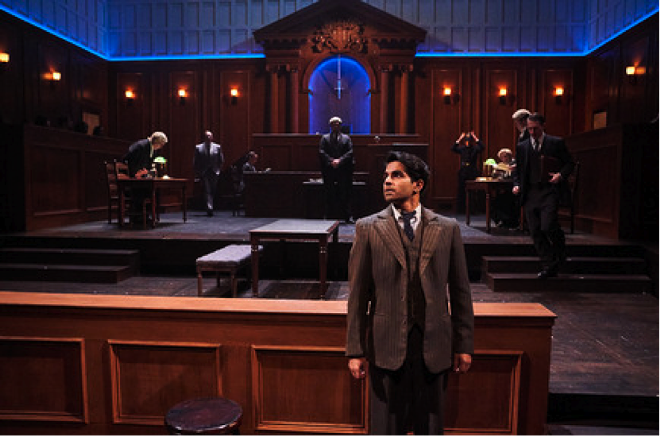 A combination of these two elements is now being performed at Great Lakes Theater in Agatha Christie’s “Witness for the Prosecution,” which she first published as a short story in 1925 and adapted for the stage in 1953. It's since been given the film and TV treatments as well.

Here, your expectations will surely be met, though the show falls a bit short of memorable.

The young Leonard Vole has formed an unlikely friendship with Emily French, an older, and much wealthier, woman. He visits her often, despite the distain he encounters from the woman’s housekeeper, Janet MacKenzie. Suddenly, French is found murdered, with Vole visiting her only the night before. The penniless man is also inheriting her fortune.

The show begins with Vole seeking the council of solicitor Sir Wilfrid Robarts. He has been questioned by the police and now his wife fears he will be accused of the murder of his friend. What follows is a murder trial of whirlwind questioning, lies and even a few twists and turns.

“Witness for the Prosecution’s” stage opening received critical raves at the time, with reviewers praising the depiction of the courtroom and guffawing over the show’s “unforeseen twist of the cards” ending.

So why didn’t this show, which had both fine performances and direction by Charles Fee, have the same jaw-dropping affect today?

Because it merely meets our expectations.

Lawyers, courtrooms and murder trials are so commonplace on T.V. that what once felt groundbreaking is now on perpetual reruns on about 30 channels right now at any given moment. Our modern-day familiarity with the dramatized courtroom surly lessens the impact of the shock and wonder the show prodded from audiences over 65 years ago.

The show unfolds on Gage Williams’ relatively realistic court room set design. The judge sits just a few feet above the rest of the proceedings under a wooden arch, complete with ridged columns and carved symbols representing the U.K. Before him is a witness stand, tables for the wig-wearing solicitors and a small stool for the defendant.

Bookending the stage are two jury boxes, which not only provides the audience with seating, but also provides the show a jury.

Defending himself from this “jury” is Taha Mandviwala as Leonard Vole. Mandviwala’s character is likable, young, innocent and very naïve. He is hoping for the very best of the justice system, assuring himself that an innocent man can not be put away for a crime he didn’t commit.

Taking the stand as Vole’s only alibi is his wife, Romaine, embodied by Jodi Dominick. She adorns an accent and a seeming cold-bloodedness. Romaine’s moral character and intentions remain a mystery throughout the show, which is a great testament to Dominick.

They all swear their oaths in front of Mr. Justice Wainwright. David Anthony Smith presides over the court in this role, asking both silly, yet reasonable questions, and spurning the lawyers when they step out of line.

Vole’s representation lies in the hands of Mr. Mayhew and Sir Wilfrid Robarts, played by Lynn Robert Berg and Aled Davies, respectively. Robarts leads the case for the defense and is portrayed by Davies with gumption and conviction. His moral character is one of the most trustworthy of the show, despite making misogynistic comments.

Rounding out the major players is Nick Steen as Mr. Myers, the Crown prosecutor. Steen is stern, challenging and quick on his feet, exemplifying the token characteristics of a good lawyer.

While Great Lakes Theater usually seizes any opportunity to give Steen a sleeveless costume, no such chance presented itself in this show, where suits and traditional black robes by designer Esther M. Haberlen are dress code.
Ambiance is added to the courtroom by warm sconce lighting provided by designer Rick Martin and the sound designer Josh Schmidt’s supplemental sounds of a court room audience’s “oohs” and “ahhs” at the right moments.

Catch "Witness for the Prosecution" through March 10. For tickets and info visit greatlakestheater.org.