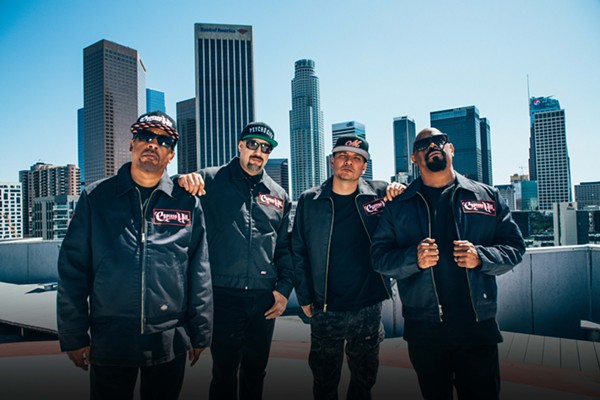 Two weed-obsessed acts from Southern California, Cypress Hill and Hollywood Undead have teamed up for the first time ever for what they've called the West Coast High tour, a co-headlining run that comes to the Masonic Auditorium on Saturday, March 9.

Elephants on Acid is Cypress Hill’s first album in nearly a decade, and it’s the first record DJ Muggs produced since 2004's Til Death Do Us Part.

In separate phone interviews, Cypress Hill’s Sen Dog and Hollywood Undead’s George "Johnny 3 Tears" Ragan speak about the connections between the two acts and talk about who'll have the better weed with them on this tour. 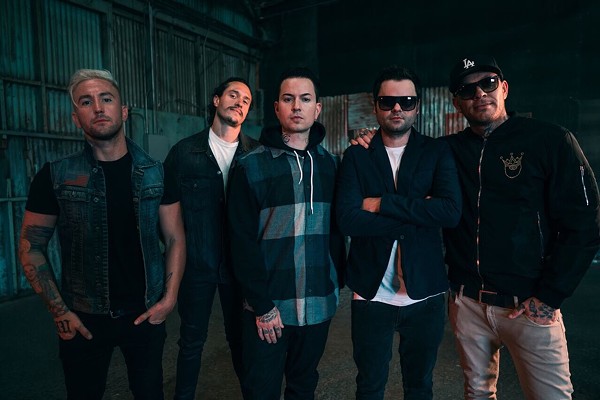 Talk about how the two bands first met and how you think the two bands will complement each other.
George "Johnny 3 Tears" Ragan: We’ve never toured with them. We’ve done [rapper] B-Real’s show Soap Box. We did a song with him on our last record called “Black Cadillac.” He’s great at what he does. We grew up listening to these dudes. We tried to get it together in the past, but one thing led to another. We’re really stoked. They’re legends to us, and it’s pretty cool. One thing that I do think we have in common is that we have a lot of fun at our shows. It’s not about aggression. If you get a bunch of people in a room at the same time who just want to have a good time, I think that’ll work.
Sen Dog: I met the Undead guys a couple of years ago. They invited me to their studio to listen to some material. They were really energetic, and I liked what they had going on. I wasn’t sure where it was going and why they called the meeting. Later, they said they wanted us to consider their band for a tour. I said, “Okay.” I put their name in the hat. I think we’ll have a good time together, and that will show on stage, and the fans will get their money’s worth.

The tour is dubbed West Coast High. Who’ll have the better weed?
George "Johnny 3 Tears" Ragan: It’s funny. We cultivate. We’ve been growing for a long time. We have our own brand. We gave Sen Dog some when we were in the studio, and he thought it was really good. They can definitely outsmoke us, so it’s not hard to imagine them outgrowing us.
Sen Dog: You know the answer to that, dude. It's Cypress Hill. You know what’s up.

Talk about what the music scene is like in SoCal. How has it evolved and changed?
George "Johnny 3 Tears" Ragan: There are lots of bands from L.A., but few are born and raised there. That’s one of the similarities between us and Cypress Hill. Most bands are transplants. The music scene has shifted with what’s popular. It’s a city of trends, which is one of the things I’ve always hated about it. One thing is that anything goes. There are other places that are much more conservative than L.A. That’s why punk got its start here in a big way. And hardcore. You wouldn’t get that in St. Petersburg. Los Angeles is a great launching pad.
Sen Dog: The music scene in Southern California is always changing and evolving. Younger artists come out, and they’ll change the face of it. For hip-hop, it’s really exciting. There’s a lot of up and coming talent. They have a lot to look up to inspiration-wise. On the rock scene, it’s really interesting. The rap-metal scene is getting some momentum again too. Cypress has always been down with that. Bands like Hollywood Undead are picking up where the genre left off.

You just put a new album. Talk about your approach on it.
George "Johnny 3 Tears" Ragan: We had some songs that weren’t done for our previous album. We put out our record and toured, but I was hung up on those tracks that we didn’t finish. I wanted to finish them before we did the next record. I was hellbent on getting the whole thing done. We went back in the studio, and it took two weeks, and we just finished everything otherwise they would have never seen the light of day. The day of putting CDs out is over. It’s all about streaming. Our fanbase is pretty engaged. [“Something to Believe”], for example, was a song that I kept coming back to. Everyone has gone through the subject of suicide. I know quite a few people who have died because of it. I had just done an ad for Your Life Matters, which is a charity organization designed to help young people. I got hung up on these stories I had read about these kids. It’s never something that I delved into logically. I just started thinking about it and couldn’t get it out of my head. I try to be as connected as possible to our fans. We have fans that we knew that have made that choice. The days of making music to be rich are over. The reason I write music is to express myself, and it was important for me to express that.
Sen Dog: I think we didn’t have an approach going into it, which is rare for us. We are always ready ahead of time. We come in prepared and stuff. This time, we didn’t know what we were going to do. We knew that Muggs was traveling the world, creating music with musicians from Egypt and other places. We had to make an album and hurry up because it had been almost ten years since the last one. We started the record and left it alone and then came back to it until we got the final mix of songs. Our first album and this album are really our most ambitious albums. When you start your career, you put all your energy into that first album. With this album, we had been gone almost eight years, and we needed to get it out. People kept asking when our new album was coming. I should mention that not at any point did our fans give up on us. We were still going strong with no single and selling out venues. It was one of those weird things. You know, DJ Muggs is our brother from Day One. He knew the sound he wanted from us from the beginning. Me and B-Real wanted to get back to the Cypress vibe and make a 2018 version, not a 1993 version of it. It’s important to have your own sound. When you listen to a band like Slayer or Metallica, you know it’s a Slayer or Metallica song. You know one of their riffs within the first seconds.

What will your live show be like?
George "Johnny 3 Tears" Ragan: I would bring a gas mask if you’re averse to weed smoke. That would be my first warning. It’s Cypress Hill, bro. I’m glad we get to play before them because with all the shit they smoke on stage, we’d get a contact high. We try to put as much energy into the show as we possibly can. We’re not Radiohead where we’re going to play a bunch of anthems. I love anthems but that’s not our place. I just want people to have a good time, and that’s really what the whole point is for us.
Sen Dog: For this particular tour, we like to perform music off every album we ever put out. Sometimes, that will only involve one song from this or that album, but that’s what we try. Along with that, we have a new routine, and we’ve been adding new songs from the new album. We’ll have some good visuals. We want to keep Cypress Hill one of the best live acts in all of music. We always want to come up with something fresh that will involve crowd participation.