Upon graduating college, and my parents’ house, I was informed by friends, co-workers and the internet that I needed to adopt a cat. Living alone could be lonely, they said. You won’t be happy without one, they said. A dog would be fine too, but a cat is easier.

Now, I’m not a monster, obviously kittens are adorable, but I’m content not owning a cat (puppy, plant, fish or otherwise). And despite all the warnings to the contrary, I am happy.

So it was with trepidation that I entered Tremont’s new Affogato Cat Cafe (761 Starkweather Ave.) to speak with co-owner Mandy Miller about bringing the feline-meets-coffee concept to Northeast Ohio.

Miller is well aware that cats aren’t everyone’s cup of tea — some are allergic and others prefer dogs — but she says that the environment lends itself well to people of all stripes.

“You don’t have to be a cat lover to come here,” Miller says. “It’s interesting, the gut instinct for some is ‘I’m not a cat person,’ but then their friend drags them here and they find themself having a good time despite themselves. We have some chill cats, we have cats that come right up to you and choose you. And who wouldn’t like that?”

Despite the cats zipping and lounging about the space, it smells fresh and is relatively cat hair free. While we sit and chat one new orange and white cat, James, keeps climbing all us both. “He has terrible manners,” Miller says. “He likes to sit on shoulders, we call him our parrot cat.”

A self-described cat enthusiast, the 27-year-old first fell in love with cat cafes while living in Washington, D.C. When she moved back home to Cleveland in 2016, she missed them so much she decided to open her own spot here. The young entrepreneur brought on boyfriend Eduardo Crespo and his sister Lea Crespo, and they officially started renovating their Tremont space in January 2018. She says getting city approval for her business took more time than expected.

“When we finally brought in the cats earlier this year, I cried,” she admits. “One full year of so much work and we finally had something to show.” 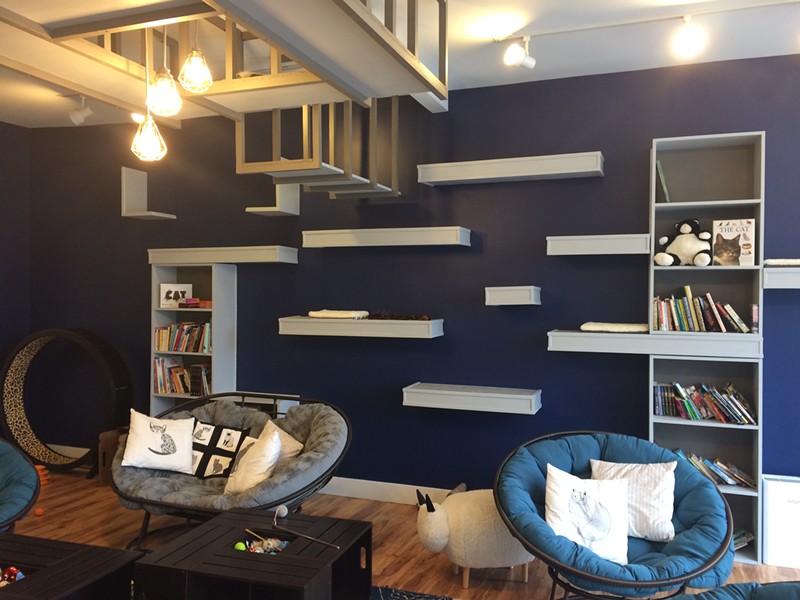 Cat cafes gained popularity in Asia 20-some years ago. However, as Miller points out, health laws in America are far more strict. In other countries, cats (which are most likely not up for adoption or sale) roam freely in the same room where coffee and snacks are served.

“I can’t even imagine what all that hair would do to the coffee machine,” Miller says.

At Affagatto, like most other shops in the U.S., coffee is served in one room, and the cats, which are up for adoption, are housed in another sealed off room. The HVAC systems are even separate. People are allowed to bring in drinks and snacks served in to-go containers to the cat side if they wish, but there’s absolutely no feeding the animals.

For those only wanting to look at Affagato’s cats — no need to touch — there are plenty of seats on the window-filled cafe side, which is open to the public. However, for those wanting to frolic with the cats, reservations (starting at $8 per hour) are highly recommended. After being open more than a month, Miller says all weekend reservations have filled quickly, but walk-ins are still accepted when there’s space.

The adoptable cats (only 16 allowed at a time) all come from the Cleveland Animal Protective League. And so far they’ve had far more adoptions than anticipated, with dozens in more than a month.

“We have people who come in specifically who are looking to meet cats in a more homey environment than in a shelter,” Miller says. “This is far more we could have dreamed of, our goal for the year was 100 adoptions.”

Miller says that plenty of people have asked if a dog cafe is next, but she counters that “there are lots of dog places in Cleveland, patios and bars where you can bring dogs, but there’s no place for cat people to congregate.”

As not to compete with the morning coffee rush of other nearby cafes, Affagato is open from 11 a.m. to 9 p.m. and offers drinks with fun feline names like Americlawno and Catpawccino. But Miller isn’t here to necessarily change the minds of people like me who think cats are just alright, but she wants to offer a safe environment for those looking to try something new.

“People want a fun place to come with the kids or on a date. So they come and socialize with the cat it's a win-win,” Miller says. “Even if they don’t come in with the intention of adoption, these cats still get socialized and they learn some manners, or the shy cats come out of their shells. It’s so nice.”