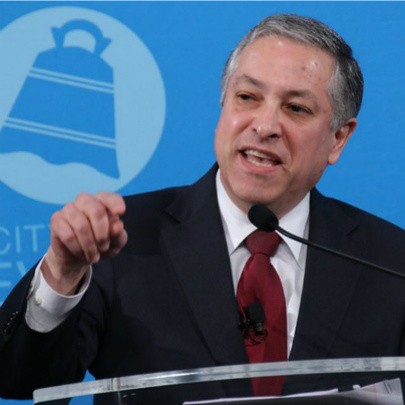 Ideastream has announced that beginning today — Fri, 3/1 — 90.3 WCPN will extend its live radio broadcasts of City Club Forums, which traditionally air on Fridays at 12:30 p.m.

What this actually means is that listeners will now get to hear the uncensored audience Q&A. In the traditional format, a speaker talks for 30 minutes, or participates in a moderated discussion with one of a handful of local media dignitaries, and then takes questions from the audience. That second portion will now be aired live.

WCPN is correct that this portion is often the most lively and relevant. In many cases, important points are elaborated upon or clarified. When former Scene writer Kyle Swenson spoke at the City Club two weeks ago about his new book, Good Kids, Bad City, the fiancee of a wrongfully convicted man that Swenson's reporting helped free stood to ask a question. It was an incredible moment.

In other cases, speakers are challenged by audience members far more effectively than by local and national journalists. In the otherwise worthless Corey Lewandowski talk in August, 2017, audience members repeatedly asked the bozo whether or not his clients would benefit from the firing of Richard Cordray, then the head of the Consumer Financial Protection Bureau, which Lewandowski had called for on national TV. Lewandowski lied and deflected, an absolutely standard response, but it sure would have made for terrific radio.

"Healthcare is telling several stories that are holding us back from improving value," the event description says. "Come hear how we, together, can tell new narratives that success in healthcare evolves from healing in hospital to healthy at home."

An audience member might consider asking about reporter Dan Diamond's important piece on the Cleveland Clinic from 2017, and the narrative of massive hospitals not paying taxes; or the related narrative of the Clinic's growth concurrent with the surrounding neighborhood's decline.