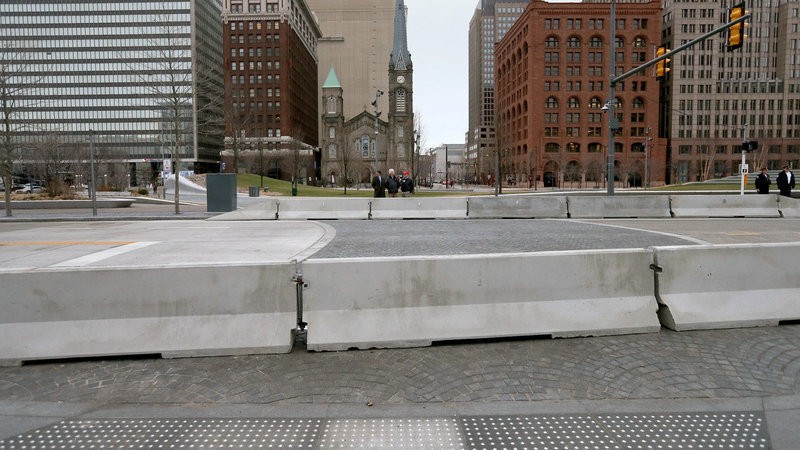 Sunday marked the two-year anniversary of the installation of concrete jersey barriers on Public Square, the ugly "safety" features that Frank Jackson has stubbornly refused to remove.

The barriers border the 600-foot strip of Superior Avenue through the Square and were placed there because of Jackson's stated concerns about lone-wolf terrorists. These concerns were debunked by local terrorism experts and roundly mocked by City Council.

Nevertheless, the barriers remain, a middle finger to transit activists and RTA, and an eyesore on the $50 million public space that multiple public and private organizations partnered to renovate in time for the 2016 Republican National Convention.

In June of last year, the downtown Group Plan Commission said that retractable bollards could be installed at a cost of $2 million. An associate at James Corner Field Operations, the firm that designed the square, said the installation of bollards would take less than two months once the money had been raised, calling it a "very surgical and quick process."

In November, a briefly circulating local petition invited Clevelanders to take a page out of West Berlin's playbook and cover the concrete jersey barrier with graffiti.

"We're a city that prides itself on claiming it can solve every problem with a mural," the petition noted, "so why not this one?"

At the time, Scene interpreted the petition as an indictment of Frank Jackson's lethargy and vindictiveness, which was initially noted by a transit advocate when the barriers were first installed in March, 2017.

"These do nothing," the advocate told us. "They're there for the city to prove that they were right all along, and that any kind of solution to bring buses to the Square will be completely ugly. It's ugly by design ... It's either expedient or it's tactical. But either way, it's mind-blowing."