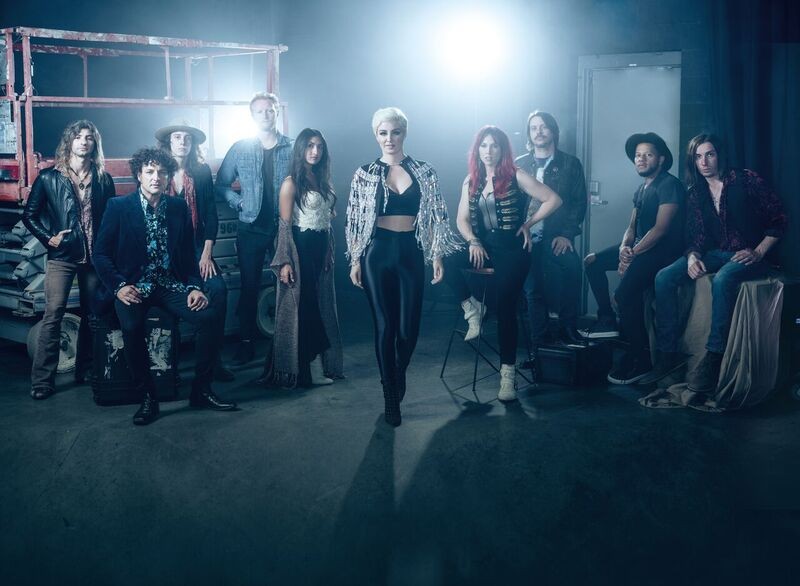 On tour to support her new album Change the Whole Thing, singer-songwriter Maggie Rose will bring a big band with her to town tonight to recreate the songs from the disc. She and the 13-piece crew that cut the record tracked the album entirely live in the studio with no overdubs as Rose channeled artists such as Bonnie Raitt, Etta James and Aretha Franklin. Change the Whole Thing coincides with a behind-the-scenes musical documentary about the making of the record to be released at a later date. (Jeff Niesel) 8:30 p.m., $15 ADV, $17 DOS. Grog Shop.

The Boys From the County Hell 20th Anniversary

When local rockers the Boys From the County Hell first got together in the late '90s as a Pogues cover band, they were just supposed to play once and call it a day. But after selling out their first show at the now-shuttered Euclid Tavern, the group's popularity escalated, and it’s been going strong ever since. The group has performed in Las Vegas and in Thailand and has become a St. Patrick’s Day staple here in Cleveland. To celebrate its 20th anniversary, the eight-piece act will play a special show tonight at the Music Box Supper Club. The concert will include Pogues classics, a tribute set of Clash songs and some other “choice” covers. (Niesel), 8 p.m. Music Box Supper Club.

Two weed-obsessed acts from Southern California, Cypress Hill and Hollywood Undead have teamed up for the first time ever for what they've called the West Coast High tour, a co-headlining run that comes to the Masonic Auditorium tonight. Last year, Cypress Hill released its ninth studio album, Elephants on Acid, and Hollywood Undead issued PSALMS at the end of last year. Elephants on Acid is Cypress Hill’s first album in nearly a decade, and it’s the first record DJ Muggs produced since 2004's Til Death Do Us Part. He traveled the world tracking down the beats you hear on the disc. (Niesel), 7:30 p.m., $35-440. Masonic Auditorium.

The Expendables have rolled through town several times in recent years, always offering up a fun evening of soulful reggae, punk and balls-to-the-wall shredfests. It’s that amalgamation that has kept the band exciting for more than a decade. To the uninitiated, 2004’s Gettin’ Filthy is a worthy intro to the music. Cue up “Let Her Go” and/or “Sacrifice” for a taste of the touchstone. Guitarist and singer Geoff Weers puts enough transformative emotion into the lyrics to nearly bring you to the Pacific shoreline. Clearly, the band’s Santa Cruz roots play out nicely in the music, and that’s true on the band’s latest full-length, 2015's Sand in the Sky, as well. You can see the Expendables picking up a few new electronic tricks, but the California vibes are still there in full. (Eric Sandy), 9 p.m., $20. Grog Shop.

For some time now, Mumford and Sons has tried to convince us they don’t need a banjo to make music. They left the instrument that helped catapult their brand of folk-pop to arena-filled stardom by the wayside back in 2015 with the release of the rock heavy Wilder Mind. Clearly, the band wants to be taken seriously. And to do that, they ditched their hipster hats and mostly-acoustic instrumentation — fans be damned. But while that record, and its follow-up, last year's Delta, may not have sparked any serious singles, rest assured the English four-piece is still big. (Laura Morrison) 7:30 p.m., $41.50-$101.50. Quicken Loans Arena.

Two years ago, Two years ago, singer-guitarist Brian Hager started to feel like he wasn't being "artistic enough" with the Chromes, a local hard-rock act he fronted. He wanted to go in a different musical direction, so he started recording demos that were "more personal" and launched the Tie Downs. The band's latest album, Tied Down, features six songs that show off the band's songwriting chops. Album opener "Equanimity" features an infectious melody, and "Jump On" starts with a driving guitar solo before the wailing vocals kick in. The band has started to write songs for its next album and will play a few songs that aren't recorded yet at the upcoming release show that takes place tonight at CODA. 8 p.m., $5 ADV, $7 DOS. CODA.

Michigan native, John 5 moved to Los Angeles when he was only 17 to pursue his dream of playing electric guitar with the stars. While the initial transition to La La Land didn’t go smoothly, John 5 would eventually find work — and then some. Early on, he toured with hard-rocking singer-guitarist Lita Ford as she toured with KISS. Then, he auditioned to play with country singer k.d. lang. While plenty of other guitarists (reportedly a couple thousand) attempted to get the gig, John 5 stood out simply because he had worked so hard to learn the material. In 2004, he launched a solo career with Vertigo, a hard rock album that shows off his nimble fretwork on tunes such as the industrial rock-inspired “Needles, CA” and the twangy cowpunk number “Sugar Foot Rag.” He's issued solo albums and toured as a solo act ever since. His new album, Invasion, will be out this summer Niesel), 6:45 p.m., $35. The Empire Concert Club & Bar.