How a Mobster Scammed the Flats East Bank Twice, With Rascal Flatts and Toby Keith Restaurants 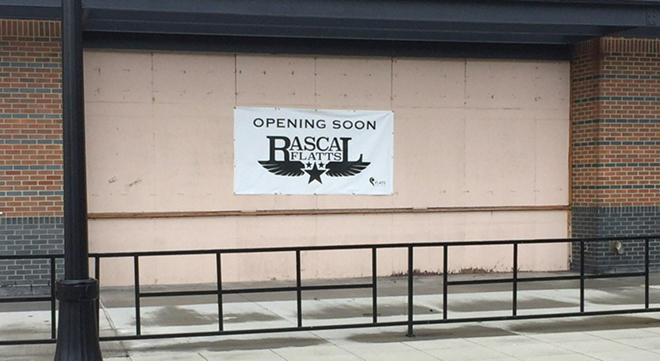 The Arizona Republic has a dynamite investigative package out this week on Frank Capri, a mafia soldier turned government witness turned Arizona businessman who scammed developers across the country by selling them on Toby Keith and Rascal Flatts bars before torpedoing them into the ground and walking away with millions.

The first part, the Toby Keith saga, was already well documented by the same paper. Capri and Boomtown Entertainment had announced deals in the early 2010s to expand the Toby Keith's I Love This Bar and Grill from 20 to 40 locations, including in the Flats East Bank. After years of waiting, the Flats officially announced in 2015 that the project would never open. The same went for the other 20 or so, after Boomtown stiffed contractors, failed to pay taxes, racked up hundreds of thousands of dollars in tax liens and faced some $30 million in lawsuits. (That number had climbed to $65 million in judgments by 2017.)

The second part begins shortly after.

By 2016, the Flats East Bank announced, amid other openings and closings, that a Rascal Flatts Bar and Grill would be gracing the development.

Scott Wolstein, developer and partner of the Wolstein Group, said at the time, “A restaurant supported by a national name like Rascal Flatts is the perfect addition to the Flats East Bank. From the beginning, we set out to build an urban waterfront destination, and we’re excited to be able to offer this type of concept in conjunction with our existing restaurants and entertainment venues. It’s also a testament to Cleveland’s resurgence for us to be able to attract these types of businesses.”

Last April the developer set a target opening date of late summer. Summer came and went, and by January of this year plans were officially scuttled. As the PD and others noted, it felt eerily similar to what happened with Toby Keith's I Love This Bar and Grill. Public records and business registrations found a good reason why: Capri's girlfriend was among the many names included.

The Arizona Republic expanded on that information this week with the sprawling investigation, showing developers like the Wolsteins had no idea that in Rascal Flatts they were getting into bed with the same guy who previously fucked them over with the Toby Keith enterprise.

The Republic found [Capri] controlled key aspects of the restaurant projects. Phone recordings, text messages, documents and interviews show Capri relied on his girlfriend and her business associate to front the restaurants.

Working behind the scenes, Capri oversaw hiring, firing, employee payments, permits, construction schedules and collection of development fees. He directed contractors on what to say to mall managers in Cleveland.

Here's how Capri described Clarke on one phone call:

"He's trying to put pressure on everybody. To get the f—king place built. But what he's going to do is f—k himself. We threatened him last week, said we're going to quit the job, OK? Then he f—king backed up, OK? So he's being handled. It's going to be fine. I wouldn't lie to you."


After seeking some $350,000 from Capri over the Toby Keith fallout, one of the many situations across the country from which Capri bilked developers of tens of millions of dollars, the Flats eventually found out they were dealing with him again when a man named Ray Rostho, who owned an Arizona construction company and who was hired by Capri to front the Rascal Flatts project here and in other cities, told Rob Clarke at one point that he really ought to just talk to Frank Capri, because it was his project.

"I said, 'You're going to have to call Frank Capri,'" Roshto told the Arizona Republic. "He was totally surprised. He shouted out, 'Frank Capri!' Then he said it again: 'Frank Capri.' And I said, 'Yeah.'"

According to the report, "Contractors said Capri used a sophisticated system of fake invoices and exaggerated construction schedules to squeeze as much cash as he could from each project with the least amount of work. After a few months, it became clear Capri wasn't interested in finishing the projects."

All the while, his longtime girlfriend and mother of his children, Tawny Costa, was listed on paperwork — her lawyers told the paper she had no control or interest in the various projects — along with her business associate, Chris Burka — he claims he was duped and the Costas were in control. In reality, behind the scenes, Capri was running everything.

The FBI and U.S. Marshals (Capri entered the witness protection program after testifying in trials spanning two decades that led to the conviction of some 70 mafia members; Frank Gioia Jr. was his given name) have declined to comment on their one-time star witness and his evolution into megascammer, but the Arizona Republic notes, "A criminal case filed in January in Arizona U.S. District Court and initially sealed from public view could signal something is about to change."