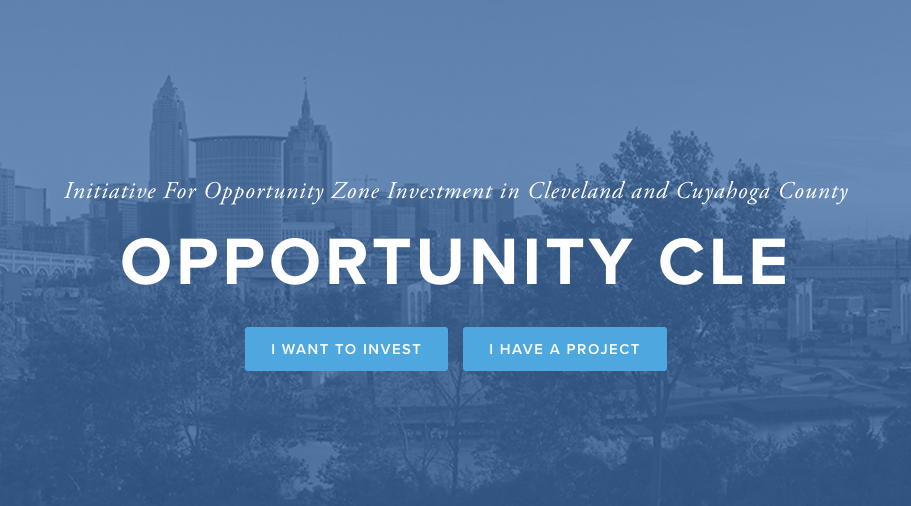 If you, like almost all of us, have unrealized capital gains sitting around, boy howdy does Cleveland want you to do business in one of the area's Opportunity Zones.

A coalition including the Cuyahoga County Land Bank, the city of Cleveland, Cuyahoga County, the Greater Cleveland Partnership, the Fund for Our Economic Future and others today unveiled Opportunity CLE, a program that aims to attract development in federally approved census tracts where investors with unrealized capital gains can get tax breaks, and even eliminate all taxes, on that money. In Northeast Ohio, the majority of those tracts are in the city proper — including noted areas that can't seem to attract development, like Tremont and Downtown — but also include sites in Euclid, Bedford Heights and other surrounding suburbs.

These coveted tax havens across the country, approved in the 2017 tax bill, hope to spur investment and development in areas with at least 20-percent poverty levels. The fear, of course, is that they'll serve as displacement and gentrification accelerators in already developing areas.

"There is a land rush going on right now around the U.S.," Brad Whitehead of the Fund for Our Economic Future told Crain's Cleveland today. "Pretty much everyone is trying to figure out what to do about Opportunity Zones."

Which begat Opportunity CLE, which has its own site for prospective investors and developers, complete with a Warren Buffet quote right up top.

GCP honcho Joe Roman was overcome with optimism. In a statement he said, “The floodgates are about to open regarding investment in opportunity zones, and we are gearing up to aggressively compete for investments in Cuyahoga County projects. This program has the potential to raise hundreds of millions of dollars in catalytic urban development opportunities here, stimulating growth and job creation in Cleveland and surrounding communities.”

Policy Matters Ohio cautioned last year that the tax incentive might enhance poor communities, but unless the program is implemented carefully, it could also increase inequality.

"The effect on low-income residents of Opportunity Zones is less clear," the think tank wrote in a report. "Tax incentives have not been very effective in creating jobs. Investment capital does not address the pressing needs of people living in or near poverty. Pricey new residential development could force rents up and drive some low-income residents out of their neighborhoods. Cuts to food aid and health care that federal legislators are considering to pay for last year’s tax overhaul (including the Opportunity Zone program) would hurt low-income families. Reporting requirements, transparency, local oversight and enforceable community benefit agreements should be an essential part of the program to ensure residents are helped and not harmed."

“One of the great fears, nationally, is that this is the National Gentrification Fund,” Whitehead told Cleveland.com. “That’s why it’s imperative that we come together and make sure that good deals get lifted up.”

Locally, lip service is at least being paid to that concern, with leaders saying they want to attract projects that create jobs, affordable housing, etc.

Last year, Whitehead told Scene there are a number of strategies that economic development organizations can pursue, including identifying investors across the country "who are applying a social lens" to their investments, "utilizing measurement mechanisms to score investments on their social impact," and leveraging philanthropic dollars to "structure deals that make sense both financially and socially."

To date, only one planned project has been announced that specifically cited the Opportunity Zone credit as a lynchpin, that being The Tappan, a proposed mixed-use "mixed income" development in Tremont.

As the PD reported earlier this year, "Adding an interesting twist to the project is the developer’s leveraging of opportunity-zone funding to subsidize what it is calling workforce housing. SCA plans to set aside 60 percent of the residential units for people whose annual income is $46,000 or less. Monthly rent for the mix of studio or one-bedroom units will be between $1,000 and $1,200."

Stark Enterprises, which is hoping to finally break ground on the nuCLEus development across from Quicken Loans Arena this summer, considered the Opportunity Zone bit a cherry on top that will improve slim profit margins.