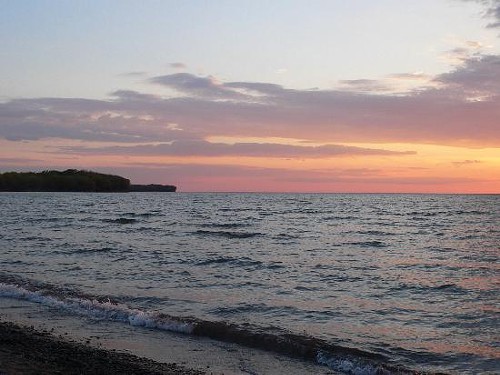 And that's just part of the good news!

The report, An Assessment of the Impacts of Climate Change on the Great Lakes, was conducted by scientists from universities around the Midwest and details how climate change has and will shift, alter and degrade the environment around one of the world's largest sources of fresh water.

That will include increased flooding, increased precipitation in the winter and spring and less in the summer, increased runoff and bacteria levels, damaged ecology, erosion, negative effects for fish and direct impacts on shipping as well as recreational boating activities. The general warming also contributes to poor air quality in the summer, which brings on a range of nasty and harmful issues for children, the elderly, and those with asthma.

“Climate change is now adding more challenges and another layer of stress,” Dan Wuebbles, the report's lead author, said in a statement. “This report paints a stark picture of changes in store for the lakes as a result of our changing climate.”

Many of the same findings were issued last year in the federal government's Fourth National Climate Assessment, conducted by the U.S. Global Change Research Program.

The report, which was commissioned by the Environmental Law & Policy Center of Chicago and the Chicago Council on Global Affairs, will hopefully be used to stir action in the various statehouses in the region to focus on the well-being of the lakes as well as renewable energy.

"Public support for protecting the Great Lakes is strong across the region. Scientific analyses clearly show that climate change has already greatly affected the region and that these impacts will continue and expand as the pace of climate change accelerates. It is critical that we recognize the importance of
one of the world’s most abundant freshwater resources and ensure its protection for generations to come."