Local Hip-Hop Duo FreshProduce Gets Collaborative on Its New Album 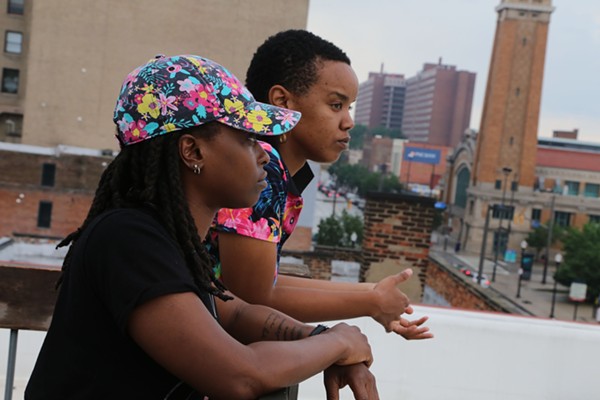 On the corner of E. 65th St. and Fleet Ave. in Cleveland's Slavic Village stands Brittany's Record Shop. On the inside, the walls are decorated with artwork from the likes of September Shy and Dakarai Akil. A shelf features more artwork along with some merch from local bands the Katy and Sink or Swim. In the back of the shop, Brittany "DJ Red-I" Benton and Samantha "Playne Jayne" Flowers sit, wrapping up the day's loose ends. Together, the duo is known as FreshProduce.

Flowers is getting the specifics on a possible performance date, and Benton is putting the finishing touches on the layout for the cassette release of their latest album, Phases. A song by the S.O.S. Band, "High Hopes," plays in the tape deck and is a perfect backdrop.

This release is the duo's fourth album of original material and fifth release in total. Something is different this time around. The ladies took their time and also found themselves collaborating with other artists more than ever.

"Most of the other albums just seemed to come together out of nowhere or we'd have a few sessions and knock a whole album out," Benton says. "In two years, we released three albums. With this one, it took like a year and a half. We started over several times to change the direction and themes."

At one point, the group considered releasing a serial-themed type of project. It was going to be a five-piece album based on different vibes, sounds and subject matter, but that idea was scrapped.

"After we kept blowing it up, from the ashes arose this project," Benton says. "I probably made at least 50 different beats. This was the first album where we had to decide what was going to make the album and what wasn't. There's other songs not on Phases, not because they aren't good but just because we wanted to catch a feeling."

"We worked with a lot of people," Flowers says. "That took a couple months in itself. Getting people in and working. That was a whole new aspect. I feel like when we first started, I wrote like 10 songs, which is normal for me. I think if we're working with a bunch of different artists, I still feel good about the process."

The duo has always tried to work with a wide array of others, but this time it found greater success.

"We've had collaborations," Benton adds. "If you look at our first album, We Are FreshProduce, there's collabs on Duce and we had collaborations on 4080 as well. It was never more than one or two songs but with this one, I feel like everybody we reached out to bit this time. I feel that was a testimony to the fact that we've been consistently doing music for the past few years and people know and trust us."

"Pick Your Weapon," one of the songs on Phases, was produced by legendary Columbus-based producer and educator J. Rawls. He took a liking to the duo after being hipped to them by DJ O-Sharp after a performance in the Capital City.

"He reached out to us when we went to Columbus a while back," Flowers says. "Then, at Sanctuary [the monthly dance party at Touch Supper Club], we sat down and talked about working it out. He sent us some beats in between the time, and we made some shit to it."

"It was cool with J. Rawls," Benton adds. "Black Star was a foundational album for me growing up, and I remember a lot of the neo-soul and hip-hop that was coming out. I think those were really essential in shaping me and the kind of music I wanted to make. I didn't even know at the time that it was Rawls behind a lot of the production."

Over the past few years, FreshProduce had been feeling increasingly disrespected by certain people within some sectors of the Cleveland music community. The track "Mercy" finds those microaggressions coming to an ugly head.

"Sometimes, it's harder to take the high road because you felt like your retribution hadn't been served yet and you're kind of left holding the bag," Benton says. "But with a lot of the same people, karma's has made short work of them. They've been handled. It's almost a thing like you can argue & fight or you can reel everything in, defend what you have and live to fight another day. I think we chose to take care of things that we built instead of going back and forth to try and wage some kind of war. I'm just sitting back with my popcorn watching those people get handled."

Flowers' position on the issue is the same. She prefers to let the music speak for itself.

"We suggested with those individual people," Flowers says. "So it's not something that's unknown. But things kept continuing and instead of being petty about it, we just kind of put it in the music. Which was something we already do. We talk about where we are in life. It's there. Once people listen to the music, you can hear our general attitude towards certain individuals. We put it out there, left it there and moved on."

On the other side of the coin, the crew finds itself having fun on the album's closer, "Miyenz." It's a playful song that will sound very recognizable, especially to fans of the local adult contemporary radio station, the Wave.

FreshProduce also founded Beat Freak — a monthly gathering at the record shop, gives local beatmakers a platform to showcase their music and network with others who share similar interests.

"It's an outlet that didn't exist," Flowers says. She serves as the host who keeps things moving each month. "Brittany's definitely the brain child of the operation. When she came with the idea, it was more like what do I need to do to make sure this pops. We had the T-shirts. We made it a super community event. It had a good response, not only for the producers but the people who attend as well. It's an opportunity for them to get to know other creatives in Cleveland."

Benton is proud of the impact that Beat Freak has had thus far and is optimistic about the event's future moving forward.

"I feel like Beat Freak was a way we could put the beat maker front and center to showcase them and encourage emcees, poets and singers to get on the mic and do live collaborations which kind of gives it an open mic feel," she says. "We don't discriminate. We don't care if you make boom-bap, trap, electric, house, experimental or whatever. We love it all. We tried to bring generations together. He wants to bring Eastside and Westside together. It's not a big space but it is a space. A lot of people come here religiously. I just want it to grow. I would love to see Beat Freak go international, but I also love that it's right here in Cleveland."

The group also still continues its outreach in conjunction with the FreshLo initiative.

"That's in its second year," Flowers says. "We've been doing stuff all year round. One of our students has a show on 95.9 FM every Saturday. Two students just started an open mic. Three students started a juice business and we also made a documentary that will be premiering on April 20 about the work we've been doing and also what we've been doing at the Boys & Girls Club. It's called 'Bridging the Gap.'"

They are currently taking applications for upcoming programming this summer. The initiative serves the Central and Garden Valley neighborhoods.

"I feel a sense of pride," Flowers continues. "They're more accomplished than some people who have been doing things for 5, 6, or even 10 years. A lot of them said it was the best summer of their lives. It's exciting to get an opportunity to help guide them."

Phases was released earlier this month on all streaming platforms. At 9 p.m. on Saturday, FreshProduce celebrate its release with a show at Grog Shop, where the group will perform the album in its entirety with the featured guests. Also scheduled to perform are Tribe Unlimited and Prince Ish.

"I was really excited for all the collaborations," Benton says. "Shoutout to everyone who was on this project. Even when Sam and I got together, we wanted to do things that brought the city together. The thing that really held Cleveland back was that division and competition, but not the healthy kind. It was more like competition that stunts everyone's progress because people don't want to unified. Maybe it's because we're Millennials and think and move differently, but we need each other."

Much like the S.O.S. Band song that reverberated through the record shop, FreshProduce also has high hopes, and the women don't see themselves going anywhere for quite awhile.