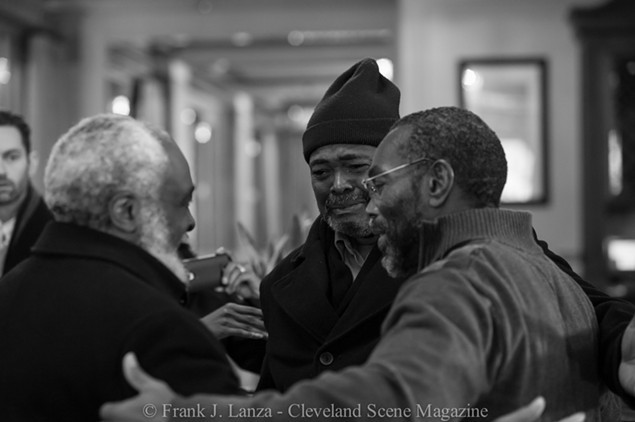 The 6th U.S. Circuit Court of Appeals ruled this week that Ricky Jackson, Kwame Ajamu and Wiley Bridgeman can sue the Cleveland police department and the officers who put them behind bars for a 1975 murder for which they were later, much later, exonerated. The ruling, first reported by Cleveland.com, reverses an earlier decision by U.S. District Judge Christopher Boyko to dismiss the three men's civil lawsuits and civil rights claims.

Back in 2011, our investigation turned up serious questions about the three convictions — convictions based solely on the testimony of a 12-year-old boy. That reporting eventually led to the Ohio Innocence Project's increased involvement on the case. Finally, in 2014, the witness recanted his testimony, saying he'd been threatened by Cleveland police detectives into cooperating.

Jackson, Kwame Ajamu and Wiley Bridgeman were exonerated later that year. Each received money from the state in settelments for their wrongful imprisonment, but the civil lawsuits aimed at the Cleveland police officers and department seek additional, deserved financial restitution for the shoddy work that landed them in jail for three-decades-plus.

The civil lawsuits are a bit tricky, not least because three of the involved officers named are now deceased. But the trio still hope to lay out evidence that the department willfully withheld evidence that would have set them free from the beginning.

It's good news, especially on the heels of the recent publication of Good Kids, Bad City, a book by former Scene reporter Kyle Swenson, who authored the original investigation that set the wheels of justice spinning in their direction, on their case and lives. Those lives continue to enjoy ups and downs, but 2019 has been especially tough year. Ajamu's wife's nephew drowned in the Canton area while being chased by police in January and Wiley Bridgeman is currently in the hospital and possibly facing charges in a hit-and-run accident that injured two construction workers in University Heights. Bridgeman might have been experiencing a medical issue when the accident happened.