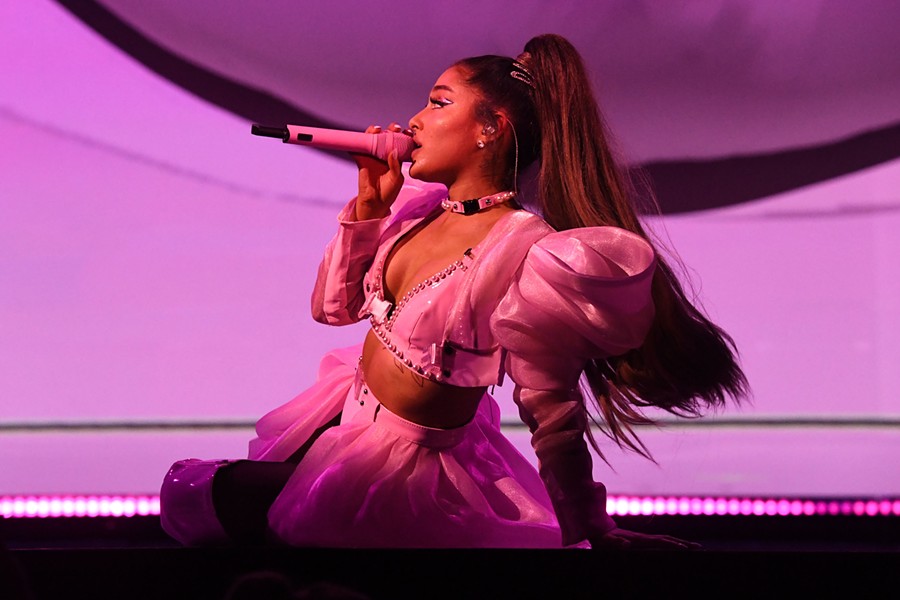 Before pop starlet Ariana Grande even took the stage at the Q last night fans screamed like it was their last night on earth. And then, it began. Grande rose from beneath the stage like a born again skin-perfecting Snapchat filter, belting out her hit “God is a Woman.” Grande was a pocket-sized force teetering in stiletto boots, swaying back and forth, the mic a giant paper weight in her tiny palm.

But there was nothing small about her voice, an attention-commanding angelic hymn from the heavens. Her dancers snaked around her wearing all red, threatening to steal the souls of the crowd and harvest them backstage into a highlighter potion for Grande’s tiny perfectly dew-y cheeks.

Grande performed her latest hit, “Break Up With Your Girlfriend, I’m Bored,” with a tongue-in-cheek cockiness that left you wondering if she is poking fun at the take it or leave it aloofness of her generation. Her dancers often draped the stage like wind-up mannequins that twerked and humped and then would run out of steam and just kind of sit there, half-waiting for another battery charge. They were all careful to show they weren’t trying too much, as if they just woke up and suddenly were on stage performing with a nihilistic indifference that rippled through the arena with each whip of Grande’s cartoonish My Little Pony horse mane.

Grande’s costumes were vinyl, pleather and plastic, switching from the muted pastels of lavenders and bubblegum pink to traffic cone orange to shiny black. Her sky high boots became her legs, an extension of her being. The relatively simple set featured a giant half dome in the middle like a big pregnant belly, pulsating images of constellations and galaxies. A giant sphere hung low from the ceiling, becoming a disco ball and a planet and stars all at once, a simulated solar system. During the ballad “Breathin,” Grande piloted our earthly bodies on a what seemed like a spaceship adventure.

Grande was a ‘90s Barbarella, a cutesy space alien bathed in the glow of pink neon, visiting one night only to star in the Instagram videos of her tech savvy devotees. She has perfected that sort of fame that seems accidental, the OMG-oops-y’all-love-me-vibe. She stomped and twirled like a decades-old Candie’s body spray ad that’s so familiar it feels like déjà vu.

Grande and her squad performed her modern-day equality anthem “7 Rings” as if they were all besties out on the town, slithering on top of a hot pink car as she sang about a lavish lifestyle she earned all on her own. Grande also showcased her massive voice during “Dangerous Woman” and “No Tears Left to Cry.”

Grande and her crew rose from the depths of the stage once again to perform her mega smash “Thank U, Next.” The performance was a copy-and-paste collage of '90s pop culture moments. Grande wore an updated Cher Horowitz in Clueless yellow plaid bikini top and skirt. Grande and her girls slipped on oversized silk blazers in homage to the film The First Wives Club and then performed the iconic dance of freedom that Goldie Hawn, Diane Keaton and Bette Midler perform at the end of the classic feel-good rom-com.

At the end, Grande sweetly thanked the crowd for supporting her before waving goodbye and disappearing into the darkness.