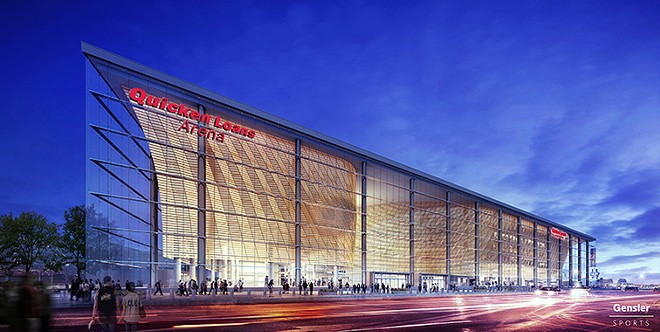 To coincide with a publicly subsidized exterior upgrade and major square-footage expansion, the Quicken Loans Arena will be renamed the Rocket Mortgage Fieldhouse, according to multiple unnamed sources and breaking media reports.

This is also the first instance (among the four major professional sports) of an arena being named for a company's product, not the company itself. It's Heinz Field, in Pittsburgh, not Mayochup Field. It's the Mercedez-Benz Superdome, in New Orleans, not the C-Class Superdome. The prevalence of Rocket Mortgage commercials, however, and now the arena re-brand, suggest that Quicken might be considering adopting the Rocket name for the company as a whole.

The decision to change the arena's name looks to have occurred only within the past month. In March, new "QUICKEN" lettering was being installed on the E. 6th side of the renovated exterior, but was taken down within a few weeks.

Decision to re-brand the Q as the "Rocket Mortgage Fieldhouse," if true, must have happened recently. This was from March 11. https://t.co/TPW7LmvtgP


The Rocket Mortgage Fieldhouse is an extremely bad and embarrassing name for the facility — which leaders never cease to remind us is publicly owned —  but sadly par for the course. It's got a nice trochaic lilt, though, that makes it better than the likes of the Chicago White Sox' Guaranteed Rate Field or the Arizona Cardinals' extremely confusing University of Phoenix Stadium.