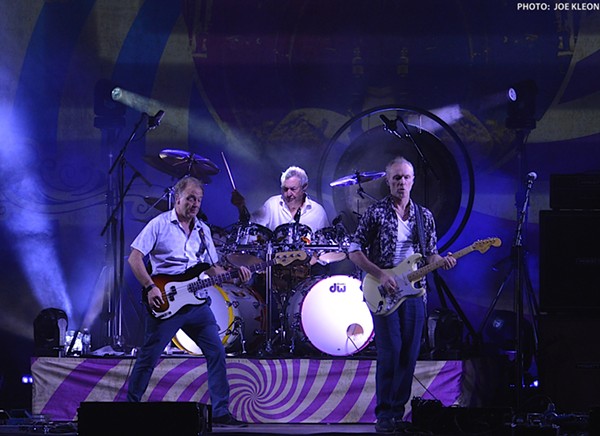 Only a couple of nights after Ian Hunter brought the music of Mott the Hoople back to Cleveland for the first time in 45 years with surviving members of the '74 lineup of the group, it was time for another unexpected musical resurrection. This time, it was Pink Floyd drummer Nick Mason, who played the Akron Civic Theatre last night in the midst of his first North American tour in 25 years.

For many years now, his Floyd bandmates, guitarist David Gilmour and bassist Roger Waters, have revisited the classic Pink Floyd catalog in a variety of ways, trotting out the expected favorites reliably, tour after tour. It would have been a no-brainer for the Floyd drummer to follow similar suit and put together his own band to go out and play those same songs.

Instead, he took a different path. Focusing on the pre-Dark Side of the Moon era of the band, Mason and the members of his Saucerful of Secrets band brought out a whole stack of songs that fans probably never thought they’d hear live again — if they’d ever had a chance to hear them live at all.

In the case of “Vegetable Man,” it was a song that Pink Floyd had never performed live. In fact, they’d never finished it, with the group, including then-principal songwriter Syd Barrett, deciding to abandon the track, which was at one point in the running for inclusion on 1968's A Saucerful of Secrets. “We ran out of Syd,” Mason quipped. “Or perhaps, he ran out of us,” he added with a wry smile,

So 52 years later, it was the closest thing to “new music” that Floyd fans would hear during last night’s Saucerful of Secrets set, and it was a real thrill, with bassist Guy Pratt singing the lyric, “vegetable man, where are you?” with an understandable sense of quirky glee.

There were many good tales to illustrate how the group arrived at putting certain songs in the setlist. For Pratt, the inclusion of “The Nile Song,” from 1969’s More, followed a moment more than a decade before when he had been rehearsing with Gilmour for a tour. As he related to the audience, at that time, Gilmour had “generously” offered to let the band members make setlist suggestions. When Pratt suggested that number, Gilmour told him, “Perhaps you should find another band!” The song had special significance for Pratt because it was the first one he had learned to play, hearing it on the Relics compilation, an album which was “half-price of all of the other albums,” but also, as he noted, featured cover art by Mason.

For vocalist Gary Kemp, best known to some for his work with Spandau Ballet, his Floyd moment came in 1974 when he saw the group perform at Wembley. As an aspiring guitarist, he should have been spending his time watching David Gilmour, he thought, but as he remembered, he found it impossible to take his eyes off of what Mason was doing behind the kit.

When the lineup for the band was first announced, it was Kemp who was a bit of an interesting selection. But seeing the band in action, there was no question why he had been chosen. He capably handled the vocals, often swapping lines with Pratt, who shared vocal duties with Kemp throughout the night. He also revealed himself as an impressive guitar player, playing slide at one point, and during “If,” from 1970’s Atom Heart Mother, he played an intricate acoustic part as Pratt sang the poignant lyric, “And if I go insane/ Will you still let me join in the game?”

In that moment, it was hard not to think about what was missing — the late Barrett, who had composed so many of the songs that would be heard that night (although that particular song was a Waters number). And indeed, as Mason told the audience early on, Barrett was “the man who made all of these things possible.” Gone, but certainly hardly forgotten.

Guitarist Lee Harris filled what would have been a large Gilmour-sized gap in the lineup with masterful guitar work, peeling off solo after solo that paid faithful tribute to the guitar legend’s past work. Keyboardist Dom Beken also was an important presence, working like a madman to help bring the extraordinarily complex sonic landscapes back to life in a way that felt fully representative of the classic sounds that had first emerged from the vinyl grooves so long ago.

And, of course, there were the visuals. As we walked to our seats, we saw a man mixing paint colors at the soundboard in a tray. Early in the night, it became apparent why, as splotchy multi-colored shapes swirled across the screen behind the band. Vintage video played out as the group worked through the classic “Arnold Layne,” once banned by the BBC, but now, the audience was “grown-up enough to hear it.”

Hearing cult classics like “Interstellar Overdrive,’ “Astronomy Domine,” “Atom Heart Mother” and “Set the Controls for the Heart of the Sun” in addition to the many album obscurities was an unquestionable thrill, one that revealed the genius of what the band was doing between 1967 and 1972. It also showed the important groundwork that they were laying for the legendary albums that would follow. Creatively, they were working on a canvas in those years that had no boundaries; there was no musical style that couldn’t be explored.

Last night’s concert was an intriguing look back at those crucial formative years. For nearly two hours, spread across 21 songs, Mason and the members of Saucerful of Secrets delivered a remarkably concise overview that demonstrated that these songs are important pieces of the overall Pink Floyd story that should never be forgotten. The fact that he brought this current band back to the Civic, the very same venue where Pink Floyd had performed in April of 1972, was a fitting bookend. With any luck, perhaps Mason will keep his drums out of mothballs and bring this show back to America again in the near future.