SEIU Trolley Tour Wanted to Show Downtown Bosses How Janitors Live, But None of the Bosses Showed Up 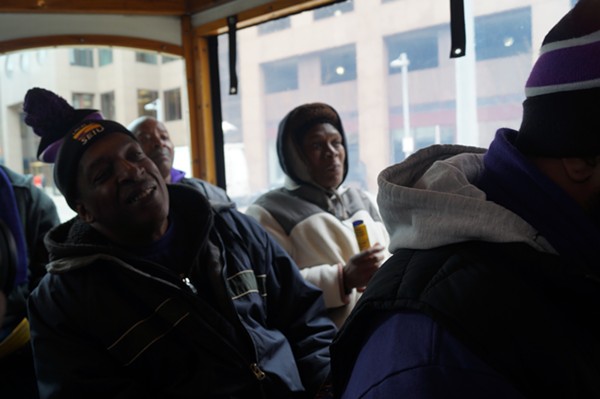 It's not lost on the janitors of Service Employees International Union Local 1 that Martin Luther King Jr. was assassinated in Memphis while supporting a union.

Last Thursday was the fifty-one-year anniversary of King's death, and both the Civil Rights leader and the sanitation workers for whose safety and increased wages he advocated were on the minds of the janitors as they rode a trolley across Cleveland to tell their own important labor story.

The only problem was, few were around to hear it. Not a single elected official, civic leader or building owner that the union had invited on its "Tale of Two Clevelands Tour" showed up. Few even bothered to send their regrets. Housing Court Judge Ron O'Leary arrived in person to apologize that he'd be unable to attend, and Mayor Frank Jackson communicated, via secretary, that he'd had a death in the family and wouldn't be coming either. The rest were no-shows.

And so the janitors who described their late-night shifts at some of Cleveland's most generously subsidized downtown properties — the Ernst & Young Building, 200 Public Square, Terminal Tower — and spoke about the poverty and neglect of their home communities, did so mostly for each other and the handful of journalists who tagged along.

The trolley rumbled and clanked over the asphalt moguls of St. Clair-Superior, Glenville, Buckeye and Kinsman, and the janitors' employers, (Geis Companies, The K&D Group, Playhouse Square Inc., Millennia Companies, Bedrock, The Wolstein Group, AmTrust Financial and others) once again did not see the dramatic juxtaposition of the two Clevelands their workers experience every day.

'Two Clevelands' has long been a political trope in town — some roll their eyes or deny its legitimacy — but the division between the city's downtown core and its neighborhoods is not an artificial one. Many Cleveland residents regard with skepticism, if not anger, the perpetual public investment in downtown properties, advanced on the basis of economic development, while their own communities suffer.

"Deep Racial & Economic Divides in the Shadow of a Downtown Renaissance" is the subtitle of a recent SEIU report on the subject. The report arrives on the eve of contract negotiations for more than 1,000 local janitors. Its aim is to point out the incongruity — indeed, the injustice — of predominantly low-income people of color keeping downtown properties clean and safe and then returning to the poverty and violence of their east side neighborhoods. (SEIU Local 1 is majority black and majority female.)

Mary Shackelford, 35, who makes $11.30 per hour as a janitor at 200 Public Square, told Scene a few days before the trolley tour that she hoped the bosses would attend so they'd recognize the impact a $15 wage would have on their employees' lives.

"It helps way more than they think," she said. "They don’t understand our living situations. It’s not their business to know, but if they had a general idea, if they could see what we're going through — what we’re striving for and what we’re struggling through — it would make a difference. We’re not going home to suburbs and gated communities. Some of us are in poverty and not able to make ends meet."

Shackelford lives with her teenage daughter in a CMHA housing unit off E. 40th. Forty percent of her income goes toward housing, which means that as her wage increases slightly — a nickel per hour one year, a quarter per hour the next — her CMHA rent obligation goes up too. Like many of her colleagues, Shackelford takes the bus to work, but can't afford a monthly bus pass. Her budgeting process is a stressful Tetris game: She pays off bills in installments and is routinely late; she trims her grocery list every time she shops; she buys single RTA rides to get to work.

"People think that just because you've got a job, you're okay," Shackelford said. "But I'm not. This is not okay. I just have to choose not to let the struggle take over me."

The first thing she'd change with a $15 wage, Shackelford said, in addition to buying her daughter cooking classes, would be her living situation. There's so much crime around her home, much of which doesn't make the news — including a shooting across the street the week before she spoke with Scene — that she promised herself she wouldn't stay in the same unit another year.

Shackelford works a 5:30 p.m. - 1:30 a.m. shift and said that her daughter stays with her grandma when she goes to work because she's afraid of being home alone. "When my daughter doesn't even want to be in the house by herself," she said, "I know I have to move."

Shackelford's situation was echoed by janitors on the trolley Thursday. In fact, two of her colleagues at 200 Public Square, Robert Garrett and Vicki Burton, work the same shift and described the hassle of taking the bus late at night. If you miss it, said Burton, it's 45 minutes before the next one comes. And it's unpleasant waiting in the cold at 2:15 in the morning.

Janitors passed a mic as the trolley passed the empty lots and busted streetlights of the neighborhoods and streets where they grew up — most of them are from Cleveland originally. They reiterated that they're not asking for the world, they're asking for basic necessities.

"You grow up through here," said janitor Rodney Shelton, at around E. 79th and Superior, "you get used to the drugs and tribulations. But we all want the same things everyone does. I want my grass to be green. I want a fence and dog going 'ruf ruf.' I want a good wage to be able to take care of my family. When people have more money in their pocket, they might not do something stupid. They might be able to pay for that emergency instead of turning to crime."

SEIU researchers and organizers noted throughout the tour that increased wages for janitors was money that would overwhelmingly flow directly back into their communities. This was money for essential home repairs, gifts or clothes or school supplies for grandchildren, groceries.

Both the Cleveland Orchestra and Cuyahoga Community College negotiated contracts earlier this year. Janitors who work for contractors there are now on pathways to a $15 wage. SEIU is hoping that downtown properties, many of which operate under a "master" cleaning contract, will follow suit.

"We're not asking for a lot," said Yanela Sims, Local 1's director for the state of Ohio. "We're asking for survival."