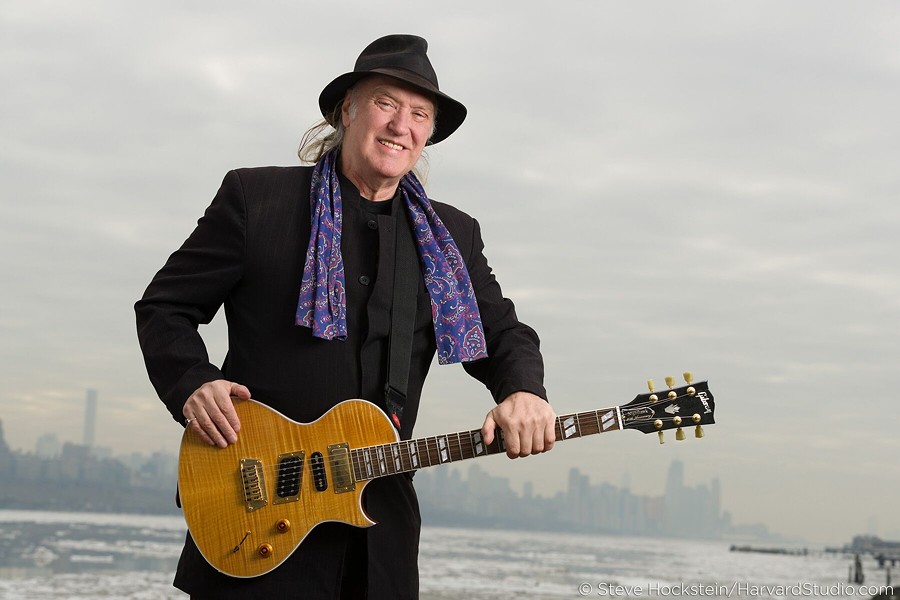 At the time that Kinks guitarist Dave Davies came up with the instrumental song “The Journey,” he saw the track as an intriguing possible gateway to a larger project, one which, as it turns out, he’s still thinking about more than 45 years later.

“When I was recording the songs, it kind of dawned on me that it was kind of film-like, like a movie soundtrack in a way,” he says during a recent phone conversation. He performs with Bill March at 7:30 p.m. on Thursday at the Music Box Supper Club. “‘The Journey’ very much had that flavor of the start of a movie or the start of an overture to a bigger piece of work. I never got around to finishing the story. You know, there’s a story yet to unfold, I think.”

Appropriately, the song finally finds an official home on Decade, a wonderful collection of Davies’ solo recordings from the '70s that was recently released. What’s interesting about the album itself is how much it sounds like an artifact of the time period, simply pulled to the surface and pushed out into the world for all to hear at last. In truth, the recordings themselves required quite a bit more work than that. The project was spearheaded by Davies’ sons, Martin and Simon, who helped to gather up the archived recordings and ultimately would work with the guitarist to select and finish the 13 tracks that are on the album.

“Some songs, like ‘Mystic Woman,’ were really kind of instrumentals. So I did a version with vocals that were only put on two years ago,” Davies explains. “There are other things that Simon did a great job copying stuff and moving stuff around and getting different kinds of sounds and echoes. I think he married the new recording techniques with the old sounds. He did a great job of that.”

While Davies admits that there have been times when he and his sons haven’t always seen eye to eye on things, they were very much in sync when it came to working on these songs, something which seems to spiritually indicate that it was finally time for this music to come out.

“I think that both Simon and Martin, although they’re very different people, they really honed in on the energy and the intent of these songs and the time and it was really wonderful working with them,” he says. “That DNA thing, the family connection, is important as well.”

Davies estimates that there were close to 25 songs “that were in a rough state” but says it wasn’t a difficult task to choose the material that found its way to Decade. “These were the songs that I thought were the best or the ones that I preferred.”

He had the benefit of more than four decades of hindsight when it came to looking at the unreleased songs but says that it was still “daunting” working on the songs because of the very personal nature of what he was writing about at the time. As he points out, the '70s were a decade of change for him personally.

“I think to start off with, the beginning of the ‘70s, I was going through a lot of inner turmoil and change and spiritual change and things like that,” he says. “So it was a time of inner searching, really. To write about these things was a chance for me to explore the inner side of life a bit.”

Davies began working on the songs at the start of the decade, around the same time that the band had decided to invest in building their own recording space, which became Konk Studios.

“It was great when we got a building, and I started to get equipment together. Because I was always very interested in production and sound and engineering and the backstory of making a record,” Davies says now. “Getting the microphones and limiting compressors and EQ units, I was very much into getting true sounds and getting interesting equipment, so that was a learning curve, which I was very enthusiastic about mics and speakers and such. That was an interesting time. It gave the Kinks more flexibility and we could record whenever we liked and it was more cost-effective, etc. having our own place.”

Happily, he’s back in a Kinks frame of mind these days and back in a collaborative mode with his brother Ray, a sibling reunion that seemed extremely unlikely a decade ago. Signs of a possible peace treaty first began to emerge publicly in 2015 when Ray joined Dave on stage at a gig in London to sing “You Really Got Me.”

This past October, the brothers were in the same room with Kinks drummer Mick Avory, an important moment, as Dave Davies and Avory hadn’t seen each other in a decade.

“We got together to do some PR for [the reissue of] The Kinks Are the Village Green Preservation Society, which, 50 years later, became a big record,” Davies says. “It did really well in England and the U.S. It’s really nice, because when Village Green first came out, it didn’t do so well. I don’t think people really knew what it meant at the time, but I think that people in modern times seem to resonate more with it.”

More recently, Ray and Dave got together earlier this year to work on songs, something which Davies says is an “ongoing” process. And he notes that it’s indeed quite meaningful that they have been able to resume their creative partnership.

“I mean, of course,” he says. “I think that he needed to do his Americana project and his solo albums. I’ve been busy recording my own solo albums, so it’s nice to get back in the grooves of working together.”

They’re looking at unfinished archival material in addition to working on new songs.

“We’ve spent quite a lot of time together, playing older archives of songs and trying to fit them into the new songs [we’ve been writing],” he says. “I think there’s a couple of things that might have been from [1977's] Sleepwalker, but mostly, it’s '80s stuff. The archive songs aren’t quite finished yet, and we’re kind of listening and deciding what to do about these tracks. It’s an exciting time.

But, as he adds, it’s too soon to know the “what” and the “when” as far as anything that might transpire from their current activities.

“We’ll see what happens,” he says, with an upbeat tone.

“Dennis [Diken] and David [Nolte] are great,” he says. “Dennis is a good vocalist and he’s a very intuitive kind of musician and drummer,” he says. “David is very similar. He kind of knows, you know, the feel is so important in any music and once you get a good rapport with people, it galvanizes the music a lot more, I think.”

The connection with Diken dates back to the beginning of the '90s when Dave and his brother and former Kinks bandmate Ray Davies found themselves sharing the stage with the New Jersey quartet unexpectedly.

“Some years ago, me and Ray did a show in Boston at Boston Garden. The Smithereens were on the bill and they offered to back me and Ray up with a couple of tunes,” he remembers. “We did ‘Lola’ and ‘You Really Got Me’ and a couple of other things. I really liked seeing them there and talking to Dennis for the first time, I realized that he was an old Kinks fan, so he knew all of the records and knew the embellishments and the way of doing the songs. I thought it was really cool and that kind of started me thinking. Eventually, I started to spend more time in New Jersey, and he doesn’t live far from where I stay when I’m over here, so we gradually got to know each other better and realized how much we had in common musically. We’ve been together ever since then.”