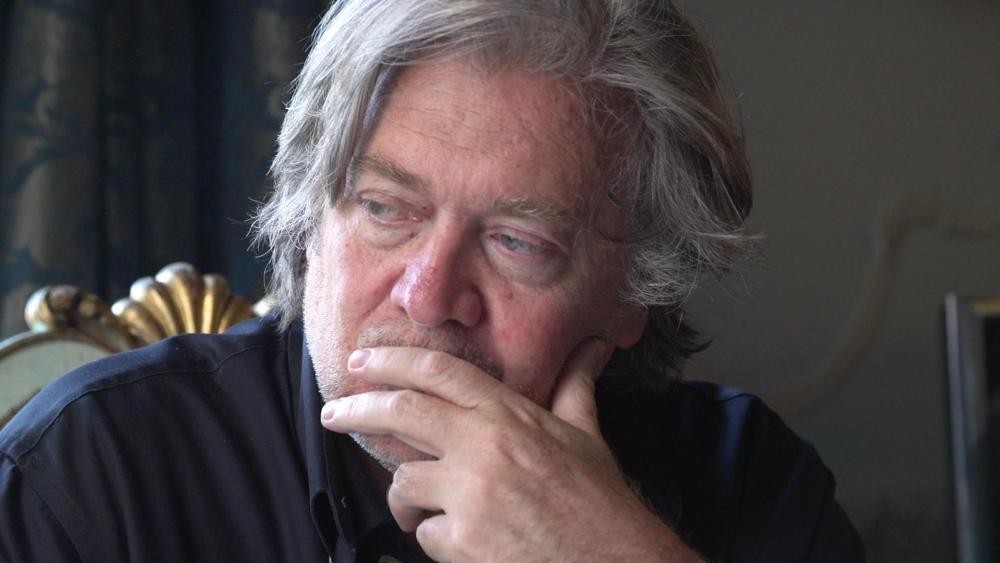 Alison Klayman’s fly-on-the-wall documentary The Brink trails Steve Bannon, the former Chief White House Strategist to Donald Trump, from the fall of 2017 to the fall of 2018 as he re-focuses his life and ambitions after being fired. The film screened at the Cleveland International Film Festival and opens today exclusively at the Capitol Theatre.

"I hated every minute in the White House,” notes Bannon in the film. Truly, this man was not meant to wear a suit and tie.

The former chief executive of Trump’s presidential campaign and executive director of Breitbart has been a persistent center of attention for left-leaning media people for the last three years. He has been painted as a secretive, behind the scenes string-pulling intellectual (he read The Art of War!), by whom the left has been largely perplexed. How has he seemingly been able to game the system to gain results that make absolutely no sense to the enlightened progress-minded folks in positions of power?

Breitbart itself is not a “facts-based” site, but rather crafts convincing headlines that hijack the “truth” of socio-political events for the sake of reinforcing and constructing a surprisingly consistent and strong right-wing ideology, one which many people share. Bannon claims that he is without a doubt the one that got Donald Trump elected, and it’s hard to argue against him. With his history in media and, as some would say, propaganda, as well as his understanding of what makes ordinary working folks tick (they need an enemy to focus their hatred on…coastal elites, anyone?), it makes a lot of sense that he was able to channel Trump’s almost superhuman ability to speak to and convince people despite being flat-out wrong into a campaign agenda.

“My goal is the deconstruction and total abolition of the administrative state,” he says in the film.

So who the fuck is this guy; what will we see when we go behind the curtain of the string puller par excellence? And how can looking at Steve Bannon’s life help us understand both what happened in 2016, and how the man the myth the legend is operating now to further the agenda of the traditional right wing both nationally and globally, especially when all the responses that the DC left has had up to this point have been limp-dick and ineffective? These are the sorts of questions that Klayman’s documentary seem to orbit, giving enough raw material for us to think about and deduce answers for ourselves.

However, one obvious answer to these questions are that he isn’t some demi-god sitting in a hidden pentagon-esque throne room calling all the shots. Rather, he’s a shockingly ordinary (and charming) guy. The man smashes 10 cans of red bull a day, has faster twitter fingers than anyone I’ve ever seen, has a good sense of humor (a female protestor crashes one of his fundraising talks and he quips that she was his ex-wife), and genuinely enjoys what he’s doing. If he’s up to something and constantly calculating, he certainly does a good job masking it.

But in all of his social encounters, whether it be with a combative, accusatory journalist, taking pictures with couples at right-wing events, with right-wing leaders across Europe, Alison herself, or his large adult nephew (who serves as his assistant), he comes off as amiable and genuine. If Klayman is trying to pin down some ideology or agenda that Bannon holds, Bannon either doesn’t immediately show his cards or altogether has nothing to hide. Which probably explains why he was ok with allowing a lefty documentarian to follow him around in the first place, even if during scenes he notes that, “I’m gonna look bad for this when the movie comes out.”

Bannon’s charm is one side of the coin, but the other side is the tension between the dopishness of his whole operation. In one scene, he is on a private jet with a former minor advisor to Trump. This guy, who seems like a total nobody, and is clearly an idiot, starts bragging to Bannon about how he came up with the idea of “The Wall,” like that would be the shining memento to put on his tombstone. Bannon and the former head of Breitbart London, Raheem Kassam, who seems like the only semi-intelligent person in Bannon’s circle, form a perfect Don Quixote-Sancho Pazza duo as they try to turn their dorm room style conversations into media reality. Their endeavors together are so comically ambitious that you’d think they were the two most important men in the world.

While there isn't really any coherent ideology, Bannon is clearly driven by an ever-present, unrelenting de(con)structive id that is intent on undoing and blowing everything up for no particular reason. After meditating on this fact, I got a sense of what Klayman seems to assert as good and evil in contemporary national and international politics, specifically in relation to figures like Ilhan Omar and AOC and far-right nationalists on a global scale: Good would be putting your foot down, putting in work against a barbarism always ready to return (taking control of women’s bodies, violently othering non-white ethnicities and cultures, etc.); Bad would be the destructive id and its desire to undo everything and undo individuality for the sake of a totally phony version of the “greater good” that justifies particular acts of violence, over time allowing them to become the norm.

The movie’s namesake comes from an Abraham Lincoln speech Bannon reads at one point in the movie. As president, Lincoln wrote about how the Union was on the “brink of destruction,” and about how he must stay steadfast in his mission in order to avert such despair. Bannon strongly identified with Lincoln, stating at one point that he’s doing the Lord’s work.

It’s at this point that I realized that Bannon’s confidence probably is a smokescreen. He wants to destroy political reality per se; but we are well past the brink of destruction, in no small part because of Bannon’s actions, anyway you look at it. It’s up to others to step into Lincoln’s shoes. Klayman’s brilliant documentary chooses to forgo actively making a judgment call on Bannon and chooses to, well, let Bannon deconstruct himself.