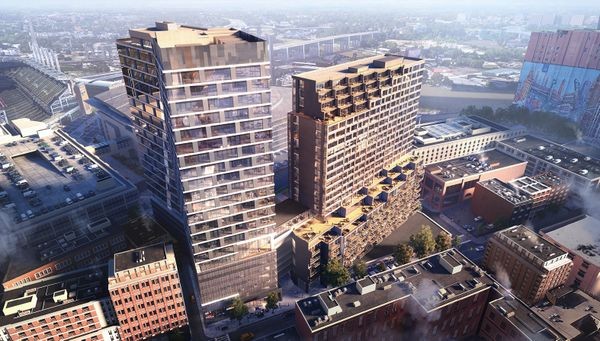 Cleveland City Council last night got the ball rolling on what should be the swift and frictionless process of giving $12 million in public funds to Stark Enterprises for the Gateway nuCLEus project.

The city's contribution, alongside $6 million from Cuyahoga County, $6 million from the state of Ohio and more than $200 million in a witches' brew of advanced financial instruments known as "Private Debt," will put the financing for the $350 million mixed-use development project over the finish line. That's according to the legislation's sponsor, Ward 3 Councilman Kerry McCormack.

Here's the "Capital Stack," from the legislation's attachments.

The city's $360,000 contribution listed above is from two Vacant Property Initiative Loans. The towering "Private Debt" line-item includes an estimated $19 million from a non-school Tax Increment Financing (TIF) arrangement. This is tax revenue that the city will forego, because it allows Stark to pay what it would pay in taxes on the increased value of the property back into the project itself.

The city contribution to nuCLEus now being "weighed" — lol — is also, of course, foregone tax revenue for the city, though it would never be described that way. In the legislation's supporting documents, and in comments by McCormack in a distributed press release, the $12 million in proposed assistance was characterized as an investment, as a loan.

"The city’s investment gets the project over the finish line," McCormack said, with the guaranteed protection that the City will be paid back 110 percent of the dollars put into the project, on top of the many other positive economic impacts NuCLEus will have.”

Sounds like a no-brainer. 110 percent? Hell yes! Free money!  Except the money being used to pay back the city's "loan" is just tax revenue.

It's not like Stark will be paying off this loan. It's not clear that this is even an official loan, as it's commonly understood, though the ordinance (561-2019) refers to the city's assistance as "forgivable loan agreements." What will be forgiven? When? Under what circumstances? There's no term lengths or payback structure described in the legislation beyond the above.

For now, it might be better to think of the money as a regular old handout, or as a grant, if you like, which the developer has promised will be worth it because nuCLEus will generate enough taxes, from parking spaces and from the (presumably impressive) incomes of all the new employees occupying the 400,000 square feet of Class-A office space to "pay back" the city.

But remember: The first $12 million in tax revenue will merely be getting the city back to zero. Once the 110 percent benchmark (13.2 million) has been reached — however long that takes — I'm not sure if anything will change. The city may just keep collecting its taxes, after acknowledging that nuCLEus made good on its "guaranty," (unless of course, as with the Q's admission tax, it is immediately repurposed for another private project).

Some of this stuff may get ironed out during council committee hearings, though it'd be naive to expect anything of substance to change. The decision has already been made. The "legislative process" is just a formality. Ezra Stark told Scene last month that he's not expecting any opposition or delay as the legislation moves through city and county council, and there's no reason why he should. Stark has said he intends to break ground in August.

NuCLEus will be located at the corner of East 4th and Prospect and will include two 24-story structures and a built-in six-story parking garage. The mixed-use project includes 277 residential units, (with the potential for luxury condos for sale), 400,000 square-feet of premiere office space and 77,820 square-feet of retail space.