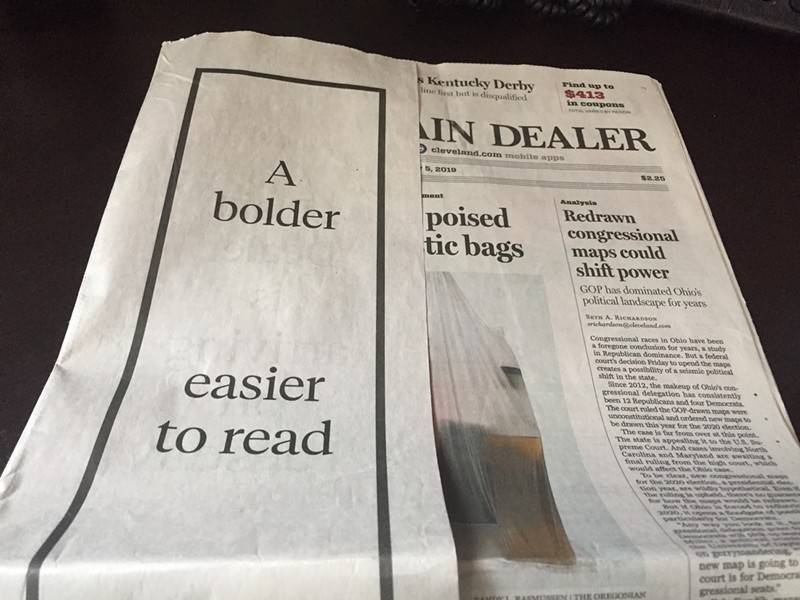 This week, 29 editors and designers in The Plain Dealer production department — the so-called "Pub Hub" — put out their final print edition. Starting today, print subscribers will see a new, templatized version of the newspaper that's assembled remotely by a production team from Advance Local, the PD and cleveland.com's parent company.

This version of the paper has been called "bolder," "easier to read" and "more useful" by editor George Rodrigue in a series of letters preparing readers for the change. Prominent Sunday ads have promoted the new design's theoretical merits in the same terms. (See image above.)

Rodrigue has made a courageous effort to make all this sound exciting and beneficial to readers. But he has also noted the underlying truth: that this decision is purely bottom-line driven, that the paper had to take advantage of a "centralized production system" whose employees can slot local stories into pre-designed Advance templates more efficiently than a Cleveland team can craft a unique product night in and night out.

The rest is marketing, lipstick on a pig.

Like other decisions, including the dramatic reduction in newsroom staff, Rodrigue has said that the outsourcing of local production jobs was necessitated by changes in the industry over which he had no control, chief among them a loss of print advertising revenue.

What he has not yet noted is that Advance maintained two newsrooms in Cleveland (the PD/print staff and cleveland.com/digital staff) at enormous expense in order to gradually weaken (and ultimately destroy) the Plain Dealer News Guild. If the company had been sincere in their desire to cut costs, they would have consolidated their redundant news gathering operations.

Note well: Advance is a corporation. Like virtually all other corporations, it is non-ideological. Its central concern is making money. Everything else is subordinated. The product that Advance sells is an audience (to advertisers) not news (to subscribers). And if Advance can maintain its product (the audience) at a lower cost, it won't think twice.

But the local audience will become increasingly difficult to maintain if the product keeps getting degraded. Subscribers can expect a print edition with more of the sorts of errors for which centralized production systems are known: stories from other markets, lifeless headlines, badly cropped photos, etc.

Last week the St. Louis Post-Dispatch laid off many of our designers & all of the copy editors by outsourcing the work to Indiana & Wisconsin. This week we get a fine example of their photo cropping skillz on the front page. But hey it saves money for bigger corporate bonuses🙄 pic.twitter.com/twMP4yH9is


There are now roughly 30 reporters working at the PD and roughly 40 working at cleveland.com. Twenty years ago, according to the Guild, its membership was 340. The remaining Guild members had their contract extended for two more years.

This is not the first PD redesign recently. In 2016, the PD debuted a narrower, "more streamlined" page design with "livelier graphics." That reduction in content was euphemized as a "more useful" layout for readers as well. Then, as now, subscribers were sophisticated enough to recognize that they were receiving a lower-quality product for a higher price. (The 2016 changes arrived on the heels of hiked subscription rates.)

Anyone who reads the paper can instantly see the new layout's key feature: it's much less content, with far fewer reporters producing it.

Meanwhile, Advance will continue to hunt for revenue streams while trying to artificially keep its audience (i.e. page view numbers) as high as possible. Cleveland.com's newest scheme is asking readers to pay a monthly fee for text messages from some of its writers. They are currently offering a monthlong free trial (and today promoted gift cards) to entice subscribers to the service.