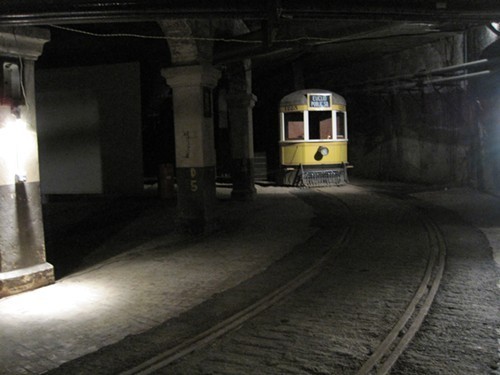 Clevelanders travel over the Veterans Memorial Bridge's upper motorway daily, but the lower deck (read: dark, abandoned tunnel), which hasn't been of much use to anyone since 1954 when streetcars were discontinued, is rarely shown to the public.

Saturday, June 22, the Cuyahoga County’s Public Works Department department hosts its one-day-a-year tour of the Veteran’s Memorial Bridge and Subway station, where tour participants get to see what lies beneath.

The free event is part of a series honoring the 50th anniversary of the Cuyahoga River catching on fire (see more events right here).

No reservations are required, but all participants will need to sign a release form before the tour. Save time and fill that our right here. Also be sure to bring a flashlight, sturdy shoes and your curiosity cap. The self-guided tour begins at 2433 Superior Viaduct, the bridge’s official entrance.

Do note that parking is extremely limited/non-existent near the viaduct entrance, thanks to construction in Ohio City. Plan accordingly and use public transportation.

Find out all about this year's tour from this city-made video below: Sign up for Scene's weekly newsletters to get the latest on Cleveland news, things to do and places to eat delivered right to your inbox.