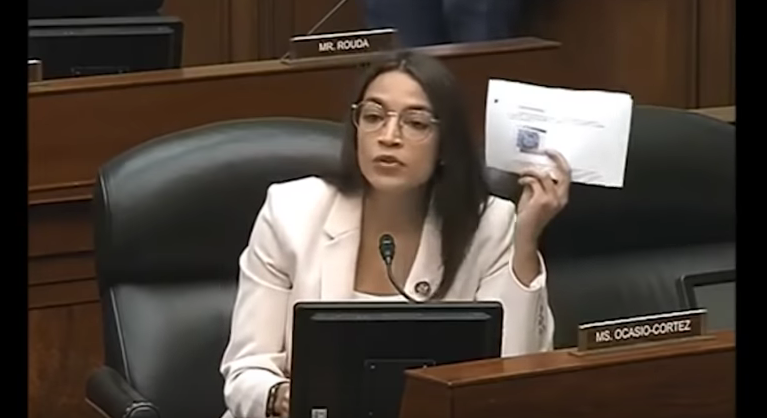 In a House Oversight Committee hearing Wednesday Rep. Alexandria Ocasio-Cortez grilled executives from Cleveland-based aerospace supplier TransDigm on the company's profit margins on government contracts with the Department of Defense. This follows years of high-profile questions from Senators and Representatives on the company's alleged price-gouging practices and a recently released Inspector General report that found TransDigm "earned excess profit" on almost every single part it sold to the federal government, with high-end profit margins touching 4,000 percent.

At issue specifically yesterday was a piece supplied by TransDigm called a "non-vehicular clutch disc." It measures three inches and costs TransDigm $32 to make.

The price tag for the government?

Ocasio-Cortez questioned the mark-up by way of explaining that when people complain that there's no money to be found for single-payer healthcare or other services — preschool, college tuition — the solution might come from clamping down on companies that upcharge the government in a so-called competitive marketplace that is very much not a competitive marketplace.

Asked if there were competitors for this specific part, a TransDigm executive claimed that there's a competitor for nearly everything they sell and that, "The government always has the choice. We believe we provide the government with well-designed, well-manufactured, high quality products delivered in a timely fashion."

The IG report, spurred by requests in 2017 by Sen. Elizabeth Warren, Rep. Ro Khanna and Rep. Tim Ryan, tells a different story, as The Intercept laid out in March. TransDigm, it found, excessively profited $16 million on $26 million in federal contracts. The DOD said TransDigm should pay that amount back, but it's voluntary, and the company has showed no signs of wanting to, so though the report was damning, it was a slap on the wrist and TransDigm's stock, which had experienced a minor downtown upon the report's release, remains healthy.

Critics for years have contended that TransDigm routinely got contracts for its subsidiaries without disclosing that it owned those companies, acquired companies that produced sole-supplier parts for the government and then cut costs and staffing at those companies while drastically hiking up prices, and generally used the DOD as an unwitting cash hose for the business.

And more, via the Intercept:

The inspector general reviewed 47 of the 113 contracts TransDigm made with the Defense Department between January 2015 and January 2017. “We determined that TransDigm earned excess profit on 46 of 47 parts,” the report states. One part yielded what the inspector general considered a “reasonable” profit of 11 percent. The other 46 ranged in margins from 17 to 4,451 percent.


Noted therein is the fact that for contracts under $750,000, the contractor is not obligated to furnish cost data to the government so officials can check cost vs. markup. (That number is now $2 million, as of 2017.) And the vast majority of TransDigm's contracts fell below that number, so the government was flying blind as to the company's profit margins.

While increased oversight, training and regulation to ensure companies like TransDigm aren't price-gouging the government don't seem likely, a report by the Government Accountability Office on the overall parts market and monopolistic practices ascribed to TransDigm is expected this summer, the Intercept reported. Meanwhile, a class action lawsuit accusing TransDigm of propping up sales by overcharging the government was filed in 2017 as well.

“The audit’s findings clearly show that egregiously excessive profit was the norm on virtually all of TransDigm’s contracts and parts,” Warren, Ryan and Khanna said in a statement upon the IG report's release.

Let the $1,443 "non-vehicular clutch disc" be just the most recent reminder of how true it is.