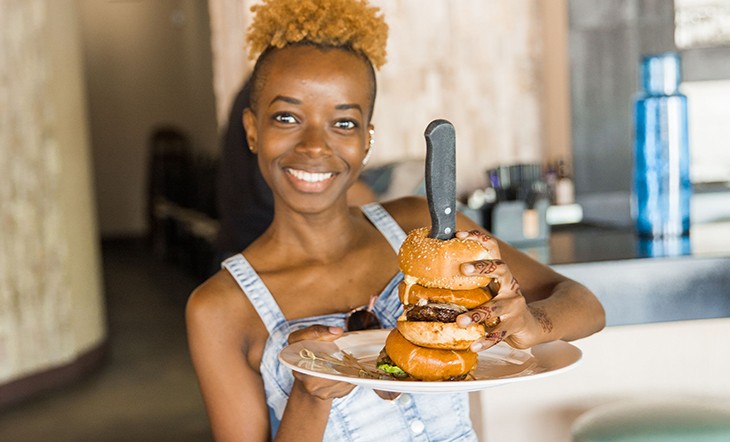 “It is estimated that Americans eat 10 billion burgers annually,” according to the James Beard Foundation.

If 30-percent of the beef in every burger was swapped with mushrooms, it would be the equivalent of pulling 2.3 million cars off the road in terms of emissions, it would conserve as much water as 2.6 million Americans use at home each year, and it would reduce agricultural land demand by an amount larger than Maryland.

Those are the lofty ambitions that propel the Blended Burger Project, a partnership between the Beard Foundation and Mushroom Council to encourage chefs to create healthier, tastier and more sustainable burgers.

May 27 marks the start of the 5th Annual Blended Burger Project. From then until July 31, chefs around the country will compete to win a trip to New York City to prepare their burger at the James Beard House and hopefully snag a professional Vitamix and $5,000 purse. This year, Cleveland Independents will have 11 local members competing.

The top 25 vote-getters from the first round will move on to the next round, during which they will be evaluated by a group of judges. The top five from that round will compete for the big prize at the Beard House.

Those vying to be among this year's winners are: 111 Bistro, Astoria Market & Café, The Cabin of Willowick, Cowell & Hubbard, Der Braumeister, Jukebox, Mallorca, Provenance at The Cleveland Museum of Art, Table 45, Tartine Bistro and Tremont Taphouse.

The first round is largely popularity-based. The participating restaurant must be among the top 25 vote-getters to advance to the second round.

“We are determined to have Cleveland represented at The James Beard House,” says Cleveland Independents’ President and Table 45 chef Matthew Anderson. “Clevelanders need to vote every day. We need to make this happen!”

While voters are encouraged to visit the restaurants to sample the Blended Burgers, they are not required to purchase them. They must, however, visit to ensure that their votes are entered.

To vote, visit this site.