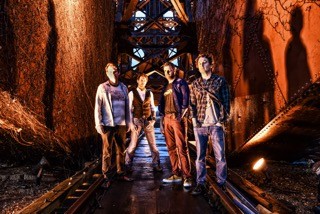 The local rock act Falling Stars has just announced that it’ll release a new EP on July 19. In advance of the EP’s release, the group has issued the single “Let It All Go” along with an accompanying music video.

The EP is a “guitar-fueled affair with songs that celebrate defying the odds, running wild and standing strong.”

The band recorded the four songs this past January at Youngstown’s Peppermint Studio with Gary Rhamy on the dials. Singer-songwriter Don Dixon (R.E.M., Smithereens) joined the sessions to produce the acoustic rock track “Black & White.”

The band plays a free show at 2 p.m. tomorrow at the Rock Hall.