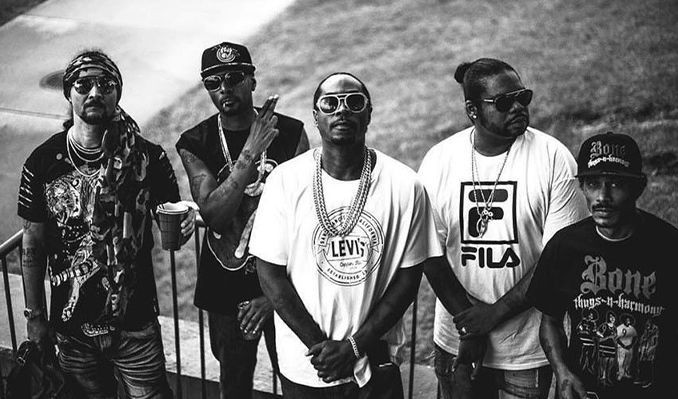 Though the group has encountered a number of bumps along the way, Bone Thugs-N-Harmony has outlasted many of its hip-hop peers. In the course of a 20-year career, the Cleveland group has won Grammys and countless other music awards, selling millions of albums. The group comes to town tonight in support of 2017's New Waves, an album that features Krayzie Bone and Bizzy Bone, two of the five members. (Jeff Niesel), 7 p.m., $30-$55. Agora Theatre.

Self-described as “part rock n’ roll circus, part game show, part city-wide art project,” the Lottery League is now in its fifth season. This year's incarnation kicked off earlier this year with a Showcase Fundraiser/Pre-Draft Party and the Draft. The BIG SHOW, the season ending day-long free festival showcasing the first live musical performances for all the 2019 season’s newly formed bands, will take place today at 11:30 a.m. at the Hamilton Collaborative warehouse. The event will feature more than 150 active musicians from Northeast Ohio. They’ve been randomly drafted into about 30 all-new four piece bands. No participant was placed into a group with anyone that he or she is currently, or has previously, collaborated with musically. Admission is free. (Niesel), 11:30 a.m., free. Hamilton Collaborative.

Today, the Rock Hall hosts the opening night of the Vans Warped 25th Anniversary exhibit, and there will be a concert featuring bands from across the 24-year history of the tour, a mini vert ramp and more. Acts slated to play include Simple Plan, We the Kings, Hawthorne Heights, Emery, Chali 2na & Cut Chemist, Meg & Dia and Peter McPoland & the Haps. Doors to this event open at 3 p.m. Live music starts at 4 p.m. Ticket holders will be able to tour the Rock Hall’s exhibits, including a special new exhibit, Forever Warped: 25 Years of Vans Warped Tour, celebrating a quarter-century of the iconic traveling music festival. Consult the Rock Hall website for more info. (Niesel)
4 p.m., Rock & Roll Hall of Fame.

In the wake of the release of his most recent album, Gold in a Brass Age, singer-songwriter David Gray comes to the Akron Civic Theatre tonight. The British musician has said he tried to do everything differently on the album. With their subdued samples, songs such as "Hall of Mirrors" and "A Tight Ship" find Gray branching out into the world of electronica, something that suits his hushed vocals perfectly. Expect to hear these songs as well as past hits such as "Babylon" at tonight's show. (Niesel) 8 p.m. Akron Civic Theatre.

A few years ago, the locally based Elevation Group launched LaureLive, a two-day music festival held at Laurel School, an all-girls (K-12) independent school. The festival has become an annual tradition and takes place today and tomorrow at Laurel's Butler Campus. Irish singer-songwriter Hozier will headline tonight. Dirty Heads, Moon Taxi, MisterWives, COIN and Dennis Lloyd will also perform tonight. Singer-songwriter Sheryl Crow will headline tomorrow and Trombone Shorty & Orleans Avenue, Lake Street Dive, AJR, Rodrigo y Gabriela and Red Sun Rising will perform that day as well. There will be nine food stands and five food trucks in the main concert area plus additional food trucks on the south side of the concert venue. Food selections will feature a variety of dishes that include vegan and gluten-free options. There will also be a few "grab-and-go" options. Local acts such as the Vindys, Front Porch Lights, Ashley Fulton and the Shootouts are also on the bill. Check the website for a complete schedule and for ticket prices. The music starts at 11:30 a.m. today and tomorrow. (Niesel), Laurelive.com.

Known for hits such as “I’m Yours” and “I Won’t Give Up,” singer-songwriter Jason Mraz has sold out venues such as the Hollywood Bowl, Madison Square Garden and London’s 02 Arena. One thing he hasn't done is perform with an orchestra. This week, however, he'll change that as he comes to town today to play with the 115-piece Contemporary Youth Orchestra at Severance Hall. The two will team up again at 4 p.m. tomorrow. Consult the orchestra website for ticket prices. (Niesel) 7 p.m. Severance Hall.

Produced by John Mellencamp, singer-songwriter James McMurtry's 1989 debut, Too Long in the Wasteland, couldn’t be classified as bluegrass, but it did have a certain twang to it. And it announced that McMurtry, the son of writer Larry McMurtry, has a good knack for words. McMurtry has nurtured that sensibility ever since. His literary talents distinguish the songs on his most recent album, 2015's Complicated Game. The album commences with the twangy “Copper Canteen,” a song about hunting season that features McMurtry’s signature sneer and a plodding drumbeat. It sets the tone for the album, yet another solid effort from McMurtry, who's said the new album is mostly about relationships. (Niesel), 8 p.m., $20 ADV, $22 DOS. Beachland Ballroom.

The Music Box's special summer Reggae Sunday Happy Hour Concert series will commence today with a performance by local hero Carlos Jones, who’ll be be backed by his P.L.U.S. Band. The indoor/outdoor concert series will take place rain or shine. Doors will open at 3 p.m. with live music from 4 to 7 p.m. Music Box will also offer food and drink specials exclusive to the series, which runs through Sunday, Sept. 1. (Niesel) 4 p.m., free. Music Box Supper Club.