States Will Be Able to Opt Out of Ohio River Pollution Control Standards, ORSANCO Board Votes 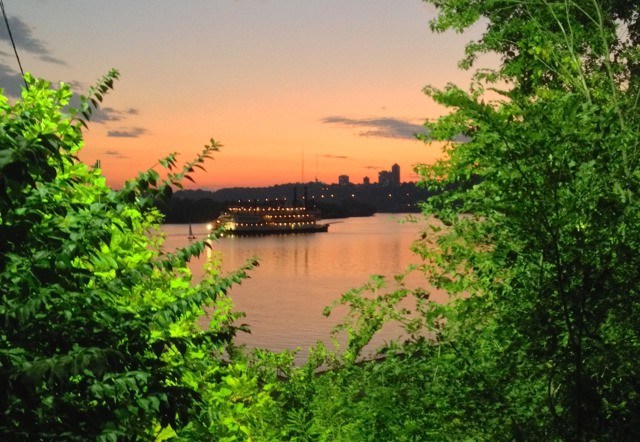 A set of pollution control standards governing eight states along the Ohio River will become voluntary, the board of the Ohio River Valley Water Sanitation Commission decided today.

Cincinnati-based ORSANCO oversees standards for emissions from about 600 companies and other organizations along a 1,000-mile stretch of the river that provides drinking water for roughly 5 million people.

Supporters of today's change say those standards overlap with state and federal Environmental Protection Agency rules in many cases, and that ORSANCO has a small staff and limited resources with which to perform its mission.

"Our staff levels have gone down and our workload has gone up," board chair Ron Potesta said at the meeting today.

But a number of people — residents of Cincinnati and Northern Kentucky and activists, as well as a minority of the board — pushed back against the change. Opponents point out that not all of ORSANCO's standards are duplicated by other agencies and point to the fact that federal regulations are being rolled back by the Trump administration.

About a dozen spoke against the proposal at the meeting today, in addition to roughly 4,000 others who filed comments online or attended three ORSANCO hearings in Greater Cincinnati, Evansville, Indiana and Pittsburgh earlier this year.

Some environmental groups are also waving red flags about the change.

"We believe that the original vision to manage the Ohio River as one ecosystem still holds," National Wildlife Foundation spokesperson Jordan Lubetkin told the board. "The bottom line for us is this: With many of our cities and towns dealing with unsafe drinking water, now is not the time to scale back clean water enforcement and walk away from our shared responsibility for the river. We need more, not less, protections for clean water. Before making any modifications to the pollution control standards for the Ohio River, the states and voting commissioners need to thoroughly and unambiguously answer how the proposed changes help improve water quality for millions of people in the region."

ORSANCO, founded in 1948, is made up of 23 commissioners, with two or three each tapped by the governors of Illinois, Indiana, Kentucky, New York, Ohio, Pennsylvania, Virginia and West Virginia — the states the river flows through — as well as two others appointed by the federal government.

Until now, states had to abide by those standards, for the most part.

Illinois ORSANCO commissioner Toby Frevert argued today that the state already has a "robust" system of pollution protections and should not be required to also expend resources meeting ORSANCO's.

The board approved an amendment to the original proposal directing a committee to study potential impacts to ORSANCO programs that could result from allowing states to opt out of the commission's standards. Some commissioners wanted to go further, requiring ORSANCO to review permits issued by states that don't comply with the commission's standards to make sure that other environmental regulations are being met.

Critics of today's change argue that it's impossible to contain water pollution within state lines, and thus the river should have an overarching set of mandatory regulatory standards.

Conroe said that there have been no complaints about the standards as they exist and that there is no reason to believe eliminating them will do any good.

"I see less and less in terms of environmental, governmental proactivity," he said. "I see status quo. I see sincere and caring environmental officials who are hamstrung by fiscal cutbacks and staff reductions, along with facing heavy pressures from the regulated community to lighten up... I believe having meaningful, river-wide required standards is an important tool to include in our toolbox."

Conroe said he has heard from state-level regulators that ORSANCO standards give them political cover to do necessary regulatory work for which they would otherwise face pushback.

Rich Cogen chairs ORSANCO's Watershed Organizations Advisory Committee and is also the founder of advocacy group the Ohio River Foundation. He says the move to make the standards voluntary is a bad idea for a few reasons: The standards have led to a cleaner river with more wildlife over the years, standards compliance is a relatively small part of ORSANCO's multi-million-dollar budget, and not all the rules are redundant, he says.

Commissioners who oppose loosening compliance requirements for the standards point out that 188 of ORSANCO's standards aren't covered by other environmental regulations in six of its member states.

Cogen says his committee proposed an amendment that would keep the rules mandatory, but provide states with a process by which they could apply for exceptions.

Most of the board's appointees have had long careers with state EPAs, regional water conservancies or other environmental groups. Federal appointee George Elmaraghy served at the Ohio EPA for nearly four decades. Elmaraghy was chief of its surface water division when he was asked to resign by Gov. John Kasich in 2013 after opposing mining permits sought by coal companies in the state.

Other members of the commission, including West Virginia’s David Flannery and board chair Potesta, are also industry consultants or attorneys who have represented industrial clients in matters around environmental regulations. Potesta's consulting firm works with a gamut of clients from nonprofits to companies in the mining, manufacturing and chemical industries.