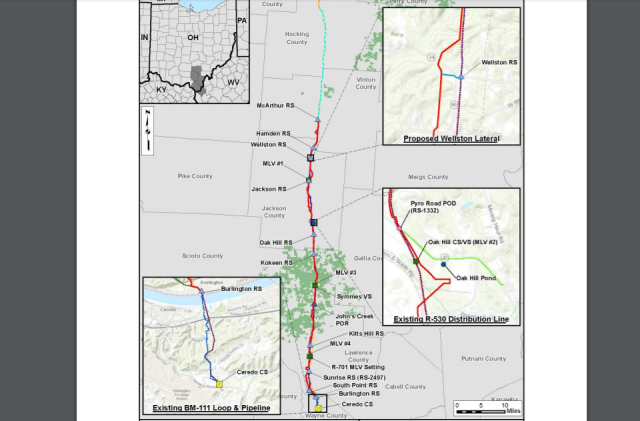 COLUMBUS, Ohio - Despite an agreeable review from regulators, some Ohio residents and organizations still object to a proposed pipeline expansion. The Federal Energy Regulatory Commission is taking public comment on its environmental assessment for the Buckeye XPress project, which involves the construction of 66 miles of 36-inch natural-gas pipeline to replace a 20-inch pipeline in southeastern Ohio.

TransCanada has said the project will increase pipeline reliability and safety. However, Cheryl Johncox, organizer for the Beyond Dirty Fuels Campaign with the Sierra Club Ohio Chapter, argued it's really about increasing its capacity.

"This is a foreign corporation looking to get a larger market share of the frack gas coming out of the region. We have such a diverse group in opposition," Johncox said. "That really begs the question: Is this really needed? It's not just a replacement. It's very clear that this is an expansion as well."

The route crosses through four counties, roughly 12 miles of the Wayne National forest and under the Ohio River into Kentucky. Johncox explained the project would impact streams, wetlands and farmland, and threaten crucial habitat.

The Sierra Club, the Ohio Environmental Council and the Center for Biological Diversity, along with several volunteer and community groups are among those opposing the project.

As a resident of Ironton near the route, Bob McCollister said he takes issue with the continued development of natural gas, and the accompanying methane discharges.

"So that's my first concern is just the methane leakage. The second thing is the effect that leakage has on water quality, potential for disasters," McCollister said. "I mean, we've seen pipeline problems across the country. All those are concerns."

And while McCollister said he welcomes economic investment in the region, he questions what will happen once construction wraps.

"Generally what happens is a pipeline comes through and construction workers come in and there's a little surge of activity, but in the end not a whole lot more jobs are created," he said. "And what worries me is that after a temporary bump, we're going to be left with a legacy that could be potentially destructive."

The environmental assessment found the proposed project would not lead to significant environmental impacts as long as appropriate mitigation measures are in place. But Johncox argued swapping out a smaller pipeline for a larger one will no doubt leave a larger footprint on the area.

"This pipeline is about more than Wayne National Forest. It's about more than our environment," she said. "This fight is really about the impact to Ohio's economy and the destruction that can be caused by the expansion of this project and whether or not it's necessary."

Public comments will be accepted through June 19.