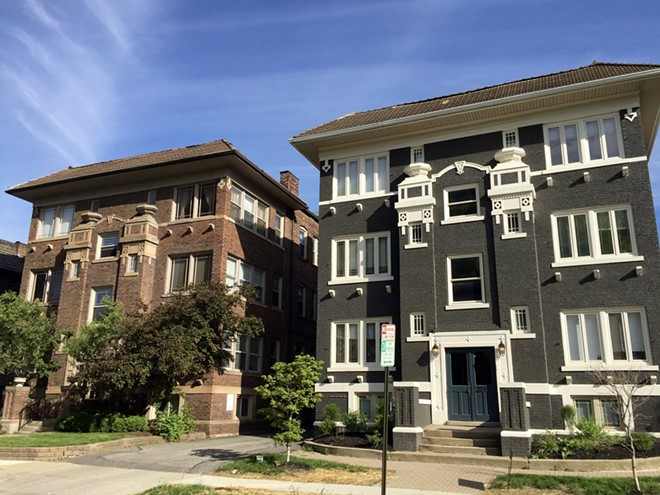 The good news is that cities across Cuyahoga County and the greater Northeast Ohio region are showing some promise in areas related to fair housing protections. But with state and federal protections disintegrating, continued discrimination in mortgage lending, and local ordinances that can make it difficult or impossible for some to maintain a safe housing situation, Northeast Ohio still has a long way to go.

On June 19th, the Fair Housing Center for Rights and Research released its annual State of Fair Housing (SOFH) report. The report is one of the largest single documents the Housing Center produces. It covers a number of topics including state, federal and local laws; trends in fair housing complaints; fair lending practices; housing voucher mobility and local and regional segregation patterns.

Michael Lepley, senior research associate at the Housing Center, spoke with Scene about the findings of this year’s report. Lepley pointed out that the report usually comes out earlier in the year, but that the federal shutdown impacted their funding from HUD, thus delaying the creation and dissemination of the report. However, the current HUD administration has been a mixed bag for the Housing Center, and for fair housing centers across the country, according to Lepley. “In a weird way, this [administration] has been one of the most generous, but they’ve also made decisions that have hurt us at the same time.”

Lepley notes that the current HUD administration has distributed more grant dollars for some fair housing programs than any other HUD administration in the last five years. Nevertheless, along with the shutdown, recent speculation about zeroing out Community Development Block Grants (CDBG) significantly impacted the Housing Center. When cities and counties were concerned that they wouldn’t receive their expected CDBG funding, they stopped giving grant dollars to the Housing Center. While the grants have picked up again, the lapse in funding was detrimental to the organization, negatively impacting those who rely on the organization, as well.

Regardless of the impact of the current administration on HUD funding, however, the report highlights the clearly negative impact that eroding federal protections have on the state of fair housing in the region. The suspension of the Affirmatively Furthering Fair Housing (AFFH) regulation will allow systems of exclusivity and inequality in housing to persist. Changes at the federal Consumer Finance Protection Bureau (CFPB) are also concerning, as the organization remains one of the most essential tools to protect residents from unfair and abusive financial practices.

Still, Lepley points to a few important trends that show promise at the local level. The passage of a county-wide anti-discrimination law in 2018 expanded protections for residents of Cuyahoga County. The ordinance is the first of its kind in Ohio and provides protections from discrimination in areas previously untouched by the state and many municipalities, including sexual orientation and gender identity or expression in the areas of employment, housing and public accommodations. Cuyahoga County and most cities within the county now provide more expansive protections than federal and state law.

Additionally, Criminal Activity Nuisance Ordinances (CANOs) – local laws that penalize property owners and renters for illegal and illicit behavior that occurs on or near their property – are receiving more attention. In the past few years, professors and students at CSU’s Levin College have examined the disparate impact of these laws and the need to protect victims of domestic violence and other vulnerable and marginalized populations. Still, the SOFH report points out that over 35% of CANOs in Northeast Ohio currently include domestic violence as a nuisance activity.

But the report also highlights several areas in need of improvement. Disparities in mortgage lending continue to persist in the region. Indeed, an April report from the Levin College’s Dr. Mark Salling shows that even when accounting for other factors, Black applicants are more likely to be denied home purchasing loans in Northeast Ohio. The SOFH report notes that in Northeast Ohio, some of the largest lenders do not even have bank branches in areas that are predominantly African American.

Another distressing trend is evictions. Despite the growing attention given to evictions, both across the county and in this region specifically, the number of eviction filings in some cities is astounding. In East Cleveland, a city with some of the most comprehensive fair housing legislation, there were 4,408 filings in 2017. With just over 17,000 residents in the city, that’s a population-to-filing ration of almost 4:1. Next door, the city of Euclid had 2,192 filings in 2017. Other courts with large filing numbers encompass multiple cities in their jurisdictions, making it difficult to parse out the exact number for each city. Lepley points to a trend: areas with the lowest rents appear to have the highest rates of eviction.

Other local fair housing concerns relate to ordinances concerning group homes and protections for those with disabilities. In seven cities across Cuyahoga County, persons struggling with substance abuse can be turned away from group homes. This practice may be in violation of the Fair Housing Act and reinforces drug stigmatization, making it more difficult for people to receive much needed help.

“Usually, race and family status are a denial of housing but [handicap/disability complaints relate to] a denial of a reasonable accommodation. That’s easier to prove because you ask for something and get it denied whereas if you’re denied housing you might not know.”

Racial segregation is a common theme in the report, as well. Dr. Rosie Tighe, an associate professor at the Levin College and a member of the Fair Housing Center board of directors, told Scene that, “The way we structure our housing development is a big part of why we continue to see residential segregation in the Cleveland region.” Tighe points to the history of segregation through red-lining, which impacted the lending patterns of the region. White flight from the city, notes Tighe, also resulted in reduced property values due to the demand vacuum.

Tighe further suggests that, “Cleveland’s current tax abatement policy - designed to spur development - doesn’t help. By offering incentives to new and renovated development, it allows the real estate market to build where they will make the most profit (i.e. in neighborhoods that are on the upswing like Tremont and Ohio City). Little of that development is happening in Hough, or Central, or Union Miles. Furthermore, by giving abatements to new, luxury development, it results in increased taxes on existing residents, most of whom do not live in new, luxury development, who must pay for this increased demand in city services. This policy is making racial segregation worse in the city.”

If these trends don’t sound new or groundbreaking, it’s because they’re not. Racial segregation and discrimination in housing and lending are long-festering issues in Cleveland. And, Lepley is open about the fact that this year’s report doesn’t include any shocking or surprising data. But the report remains a valuable source of solid research and an important reminder that significant work remains to be done. Only three cities in Cuyahoga County have source of income protections for Section 8 Housing Voucher holders. Fair housing complaints about retaliation continue to rise. Housing voucher mobility continues to be constrained with few voucher holders living in high-opportunity neighborhoods. And, despite the many localities with laws that surpass Ohio state law, several still exempt small housing providers (those who many rent out only a few single-family homes) from discrimination protections.

Local elected officials should be encouraged to read the report and pursue legislative and administrative action. The June timing might prove useful. With a summer break coming up for many local legislative bodies, elected officials can take the time to review the findings and craft legislation. As the report concludes, “The Fair Housing Center believes that [additional protections] will strength our region and benefit the entire community, making our region not only more just and equitable but economically stronger.”