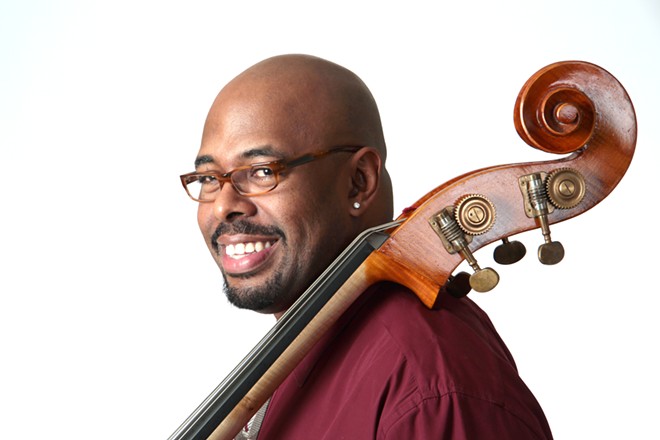 Christian McBride, who’ll pay tribute to the late, great soul singer Bobby Womack next week as part of Tri-C’s annual JazzFest, had an opportunity to meet Womack, but he chickened out.

“I came very close to meeting Bobby Womack, but I got nervous,” he says via phone from his New York office. His tribute to Womack takes place at 6 p.m. on Saturday, June 29, at the Ohio Theatre. “I got cold feet and didn’t say anything. I saw him in a restaurant in L.A. He was walking out as I was walking in. I just got cold feet, and I feel bad. I should’ve said something to him."

While known as one of jazz’s great bassists, McBride wasn’t immediately drawn to jazz.

“My bone marrow is soul and Rhythm & Blues,” he says. “I always tell people that there’s great irony that I’ve been identified mostly as a jazz artist. People I grew up with are probably wondering when I took this turn.”

He says the “turn” probably took place when he started playing the acoustic bass in middle school.

“I identified the acoustic bass with jazz,” he says. “I was indifferent about jazz when I was 11, as most 11-year-olds are. My great uncle, who’s also a bass player, got so excited that [I was playing bass] that he gave me a stack of albums to listen to. They were all jazz albums. He’s one of the greatest mentors I could’ve ever had. He explained things to me in such a wonderfully entertaining way. I thought he was the coolest guy in the world. I thought if jazz makes a person that cool, I wanted to be that cool. I fell in love with not only the music but the personality it gave my uncle.”

The acoustic bass doesn’t appear in much old R&B and soul, but an album McBride cut with Questlove in 2000 tried to change that. That album, The Philadelphia Experiment, features funky tunes that showcase the acoustic bass.

“We did all these funk grooves, and the album is probably a 50-50 split, part acoustic and part electric,” says McBride. “I was surprised at how many people were turned on by the acoustic funk. I also did a record that year with George Duke called Face the Music. Out of the 10 tracks on that album, I played like eight of them on the acoustic bass. People told me they had no idea the upright bass could be that funky. Before that, only on rare occasions would you hear upright bass on funk tracks. You might hear it on an old Jackie Wilson record or maybe some James Brown pop records from the early ’60s. Once the music started getting downright funky, it was all electric. But if the acoustic guitar and the piano can be funky, why not the upright bass?”

McBride says he first heard Womack's music when he was a kid. Later, he’d delve deeper into the music of the man he refers to as a “triple threat.”

“He was a great singer, obviously and that’s how most people know him, but he was also a great guitarist and writer,” says McBride. “That’s a rare find.”

Womack, who grew up in Cleveland, lived in abject poverty while he was a youth. That upbringing is reflected in tunes such as “Across 110th Street,” a song driven by Womack’s soulful vocals and a funky guitar riff. “Trying to break out of the ghetto was a day-to-day fight,” Womack sings on the tune.

“So many great blues and soul musicians that we admire came up like that,” says McBride. “They had that pain and that passion to change their scenery and change their situation. Where they come from plays a part in who they are. They never tried to run from that, not in the cultural or spiritual sense of it. They never wanted to live like that again or go through that suffering. But at the same time, they were acutely aware of how their suffering made their music sound the way it sounded.”

For the upcoming show at the Ohio Theatre, McBride says he and a backing band that includes vocalists Nona Hendrix, Avery Sunshine and Nigel Hall and Akron-based guitarist Dan Wilson will play “every hit Womack ever had.”

“I hope that for those who know the genius of Bobby Womack that we do a good job in saluting him and for those that don’t, I hope they get curious to find his music right away,” he says, adding that he expects the concert to be a joyous occasion, something that’s definitely needed in these troubled times. “[Music can turn] anger into creativity, and you can reverse it the same way those great artists did. Bobby Womack took all that pain and anguish he experienced while growing up and made this great music. James Brown did that. Aretha Franklin did that. Miles Davis did that. Charlie Parker did that. Whitney Houston did that. They all did that.”